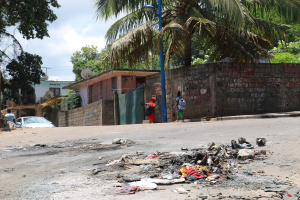 (AFP) - On the French Indian Ocean territory of Mayotte, clashes between machete-wielding gangs have left at least one dead, highlighting chronic crime problems that have rung alarm bells in Paris.

In the densely populated main city of Mamoudzou, street battles have struck fear into residents and led the mainland government to send a contingent of elite anti-terror police on Tuesday to help restore order.

A 20-year-old was stabbed to death on November 12 in the northern slum-fringed suburb of Kaweni, and a school bus was attacked in the same area last week.

In the southern district of Mtsapere, lines of burned-out cars point to reprisals, with gangs of several hundred men and boys, some as young as 12, responsible for the daily unrest that includes roadblocks and attacks on motorists.

"What additional act of barbarism do we need so that the republic reacts?" local MP Estelle Youssouffa asked in the national assembly on Tuesday, imploring the government to tackle the unrest.

The outbreak of violence underscores declining living standards in Mayotte and has brought to the fore longstanding accusations of neglect by the Paris government, which are often heard in other overseas French territories in the Caribbean and Pacific.

Mayotte was paralysed for six weeks by strikes and blockades in 2018, and the French Caribbean islands of Martinique and Guadeloupe both erupted in violent protests last year.

"Now it's on the front pages but our paradise has been a hell for some years now," Youssouffa, a former journalist and community organiser, told France 24 television on Wednesday.

Administered as a fully fledged French "departement", Mayotte has an unemployment level of 30 percent and by far the country's lowest per capita annual income -- around 3,000 euros ($3,100) compared with a national average of nearly 22,000 euros.

The territory is composed of two islands that voted to stay part of France in 1973, while the others in the surrounding Muslim-majority archipelago sought independence, becoming the Comoros Islands.

After decades of coups and corruption, the Comoros Islands is one of the poorest countries in the world, leading to mass emigration to the French territory just 70 kilometres (44 mile) away by boat.

Like many in Mayotte, where public services such as schools and hospitals are under severe pressure, Youssouffa considers illegal immigration to be "the root" of the current gang violence.

According to official statistics, Mayotte's population was 256,000 in 2017 -- an increase of 60 percent in 15 years -- but Youssouffa estimates it could be as high as 500,000 when uncounted Comorians are taken into account.

Across the political spectrum in France, the influx is blamed for the unrest.

"It takes two hours in a boat to reach Mayotte and it's true that many Comorians travel to Mayotte, and that creates dreadful tensions with these unjustified clashes," Communist Party leader Fabien Roussel told the BFM news channel on Wednesday.

He called on the government to reach an agreement to stem the flow of people from the Comoros Islands, which claims Mayotte as part of its territory and has several UN resolutions condemning France in its favour.

Relations between Paris and the Comoros Islands have often been tense, most recently in 2018 when the Comoros began refusing to take back its people.

On the streets of Mamoudzou on Wednesday, young people said they expected the tit-for-tat attacks and unrest between gangs from the north and south of the city to continue.

"With them, it's a world war," a young person who gave his name as "De Baco" told AFP in the northern Kaweni area, referring to rivals in the south.