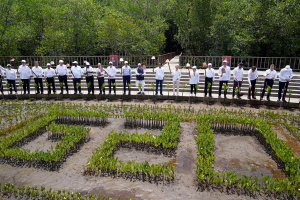 G20 Leaders raise their garden hoes for a group photo during a tree planting event at the Taman Hutan Raya Ngurah Rai Mangrove Forest, on the sidelines of the G20 summit meeting in Nusa Dua, on the Indonesian resort island of Bali on November 16, 2022. (Photo by Alex Brandon / POOL / AFP)

(AFP) - The Group of 20, including Russia, will deplore the economic impact of the Ukraine conflict, according to a draft communique Tuesday, with most members also condemning the war.

The draft statement, seen by AFP during a summit in Bali, Indonesia, will also call for the extension of a deal with Russia expiring on Saturday that allows the export of Ukrainian grain.

"This year, we have also witnessed the war in Ukraine further adversely impact the global economy," the draft reads.

Countries "reiterated our national positions" and "most members strongly condemned the war in Ukraine", it adds.

"It is causing immense human suffering and exacerbating existing fragilities in the global economy."

The draft notes there were "other views" and that the "G20 is not the forum to resolve security issues", but members acknowledged that security issues could "have significant consequences for the global economy".

Russia's eight-month-old invasion of Ukraine has caused a disastrous spike in global food and energy prices, tipping millions more into poverty and raising the spectre of famine for some.

Ukraine is one of the world's top grain producers, and the Russian invasion had blocked 20 million tonnes of grain in its ports until the United Nations and Turkey brokered a July deal giving shipments safe passage.

That deal expires Saturday, and the draft communique urges its "full, timely and continued implementation".

The document, which must still be approved by G20 leaders before it is officially issued at the summit's close on Wednesday, warns "today's era must not be of war."

And it calls the use or threats to use nuclear weapons "inadmissible", after dark rhetoric from Russian President Vladimir Putin on their possible use in Ukraine.