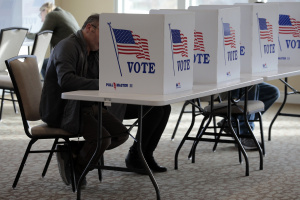 People cast their ballots in the US midterm election at Wolverine Lake, Michigan, on November 8, 2022. (Photo by JEFF KOWALSKY / AFP)

(AFP) - Americans headed to the polls on Tuesday in midterm elections in which Republicans are chasing a congressional majority that would paralyze President Joe Biden's agenda and serve as a springboard for another White House run by Donald Trump.

Biden's Democrats are facing a gargantuan struggle to hang on to Congress, after a race the president has cast as a "defining" moment for US democracy -- while Trump's Republicans campaigned hard on kitchen-table issues like inflation and crime.

At stake are all 435 seats in the House of Representatives, one-third of the Senate and a slew of state and local positions. Five states are holding referendums on abortion -- California, Vermont, Kentucky, Montana and Michigan.

First results will begin trickling in after 7:00 pm (0000 GMT) but with razor-thin margins in some key congressional races a full picture may not be available for days or even weeks, setting the stage for likely acrimonious challenges.

The bitter political divide in the country was on the minds of many voters as they cast their ballots.

"I hope that we'll get a better mix of candidates and that both sides can actually work together to solve our issues instead of fighting against one another," said Sarah Hunt, a 41-year-old teacher as she cast her ballot in New York.

"There's so much polarization and misinformation that I'd like to make sure that my voice is heard," said Robin Girdhar, a 61-year-old doctor at a polling station in Pittsburgh, Pennsylvania.

Trump -- who has all but announced he will seek the White House again in 2024 -- grabbed the election eve spotlight to flag "a big announcement" on November 15, while Biden made a final appeal to Democrats to turn out en masse.

"The power's in your hands," Biden told a rally near the capital. "We know in our bones that our democracy is at risk and we know that this is your moment to defend it."

Polls show Republicans in line to seize the House, which would allow them to snarl the rest of Biden's first term in aggressive investigations and opposition to spending plans.

Returning to the White House Monday night, Biden told reporters he believed Democrats would hold on to the Senate but it would be "tough" to retain the House and his life in Washington may become "more difficult."

If both the House and Senate flip, Biden would be left as little more than a lame duck and his legislative agenda would be frozen.

That would raise questions over everything from climate crisis policies, which the president will be laying out at the COP27 conference in Egypt this week, to Ukraine, where Republicans are reluctant to maintain the current rate of US financial and military support.

An influx of far-right Trump backers in Congress would also accelerate the shift that has been taking place inside the Republican Party since the former real estate tycoon stunned the world by defeating Hillary Clinton for the presidency in 2016.

Despite facing criminal probes over taking top secret documents from the White House and trying to overturn the 2020 election, Trump has been using the midterms to cement his status as the de facto Republican leader and presumptive presidential nominee.

In a typically dark, rambling speech to supporters in Dayton, Ohio, the 76-year-old Trump said, "if you support the decline and fall of America, then you must, you absolutely must vote for the radical left, crazy people."

"If you want to stop the destruction of our country, then tomorrow you must vote Republican in a giant red wave," he said -- before teasing his 2024 announcement.

Across the country voters called on their fellow citizens to cast their ballot in the midterms, which historically have low turnout.

"Abortion is probably the biggest issue for me," said Alexandra Ashley, a 30-year-old lawyer as she cast her vote in Pittsburgh. "I want to make sure it's available for everybody and safe."

More than 44 million ballots were cast through early voting options, meaning the outcome had already begun to take shape before election day.

Senate races in Pennsylvania, Nevada, Arizona, Georgia, Wisconsin, New Hampshire and Ohio are expected to be close and any one of them could swing the balance of power in the chamber.

Trump has already claimed -- baselessly -- that swing state Pennsylvania "rigged" the midterms -- reprising his playbook from the 2020 election which he falsely asserted was stolen by Biden.

Citing growing support for voter conspiracy theories among Trump and his Republicans, as well as their push to curb abortion access, Biden has warned that democracy and basic rights are at stake on Tuesday.

Republicans have countered that a vote for Democrats means more soaring inflation and rising violent crime, seeking to make the midterms a referendum on the president.

The outcome will likely determine whether Biden, who turns 80 this month and is the oldest president ever, will seek a second term in 2024 -- or step aside.