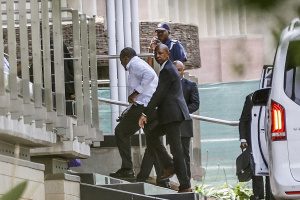 Member of the African Union mediation team, Former Kenyan President Uhuru Kenyatta (L) arrives for the peace talks between the Ethiopian government and Tigrayan People's Liberation Front (TPLF) held at the Department of International Relations and Cooperation (DIRCO) headquarters in Pretoria on October 26, 2022. The first formal peace talks between the warring sides in the brutal two-year conflict in Ethiopia's Tigray region opened in South Africa on Tuesday. Led by the African Union (AU), the negotiations in Pretoria follow a fierce surge in fighting in recent weeks that has alarmed the international community and triggered fears for civilians caught in the crossfire. (Photo by Phill Magakoe / AFP)

(AFP) - Talks between the Ethiopian government and the rebel authorities in Tigray aimed at finding a peaceful resolution to their devastating two-year conflict were continuing Monday, sources familiar with the discussions said.

The negotiations led by the African Union began last Tuesday in South Africa, the first formal dialogue to try to end a war that has killed many thousands of people and unleashed a desperate humanitarian crisis in northern Ethiopia.

In an interview with Chinese state media, Prime Minister Abiy Ahmed voiced hope that peace could be achieved, without making any direct reference to the talks underway in Pretoria.

"We're working towards peace, we are trying to convince the TPLF (Tigray People's Liberation Front) to respect the law of the land, to respect the constitution and to act as one state in Ethiopia," Abiy told the English-language CGTN news channel in an undated interview posted on Twitter.

"Of course if there are lots of interventions from left and right, that is very difficult," he said.

"If we could do that, peace is achievable. I hope we'll achieve that."

Since the negotiations began, intense fighting has continued unabated in Tigray, where government troops backed by the Eritrean army and regional forces have been waging artillery bombardments and air strikes, capturing a string of towns from the rebels.

The international community has voiced deep alarm over the combat and the human cost it has exacted on civilians caught in the crossfire.

Abiy said that in towns in Tigray now under the control of Ethiopian forces, such as Axum and neighbouring Adwa, the government was providing humanitarian aid but did not elaborate.

South Africa had initially said the discussions between the federal government and the Tigrayans would run until Sunday, but they remain shrouded in secrecy.

Ebba Kalondo, spokeswoman for AU Commission chair Moussa Faki Mahamat, said in a message to AFP that "there was no date limitation put on the talks".

A diplomat with knowledge of the discussions confirmed to AFP that the talks were continuing on Monday, but added: "They are very strict about confidentiality."

A source close to the Tigrayan delegation in South Africa had told AFP at the weekend that the talks would likely continue until Tuesday.

Diplomatic efforts to try to bring the government and the rebels to the negotiating table gathered pace after combat resumed in late August, torpedoing a five-month truce that had allowed limited amounts of aid into Tigray.

The international community is calling for an immediate cessation of hostilities, humanitarian access to Tigray where many face hunger, and a withdrawal of Eritrean forces, whose return to the battleground has raised fears of renewed atrocities against civilians.

The conflict erupted on November 4, 2020, when Abiy sent troops into Tigray after accusing the TPLF, the regional ruling party, of attacking federal army camps.

Since then, the fighting in Africa's second most populous country has forced well over two million people from their homes, and according to US estimates, killed as many as half a million.

UN children's agency UNICEF said in a report issued at the weekend that about 574,000 people alone had been displaced in Tigray as well as the neighbouring regions of Afar and Amhara since combat resumed in late August.

"Insecurity and restrictions on the movement of aid continue to constrain the humanitarian response across the three regions," it said.

Tigray remains largely closed off to the outside world with no communications and a shortage of food, fuel and medicines, while access to northern Ethiopia is restricted for journalists.

The World Health Organization (WHO) on Friday reported that cases of malaria had increased by 80 percent in Tigray compared to a year ago.

And according to the UN's World Food Programme, the rate of global acute malnutrition among children under five in Tigray is 29 percent.

Last week, Amnesty International said every party involved in the war had committed crimes against humanity.