"Seychelles is like a live laboratory", says Monaco Explorations chief 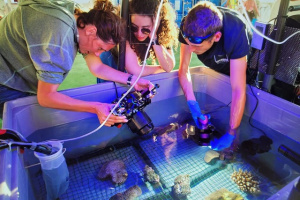 The team of 80 scientists from Monaco, France, Seychelles, Reunion, and Mauritius, spent a week on the atoll to carry out scientific work. (Monaco Explorations)

The team of 80 scientists from Monaco, France, Seychelles, Reunion, and Mauritius, spent a week on the atoll and will carry out scientific work on coral, mangroves, seabed, turtles, and much of the flora and fauna around and on Aldabra.

Monaco Explorations was initiated by Prince Albert I of Monaco over 100 years ago and is now being headed by his great-great-grandson Prince Albert II of Monaco. The project was created with the aim of supporting marine governance and planning.

SNA met with Robert Calcagno, managing director of Monaco Explorations, to learn more about the research in the Indian Ocean and Seychelles.

SNA: To start with, why were the Indian Ocean and Seychelles chosen as part of the Monaco Explorations?

SNA: Why the focus on Aldabra atoll?

RC: Within the western Indian Ocean, Seychelles is clearly one of the strongest countries in terms of its dimension — by this, I mean that Seychelles might be very small in land mass with less than 100,000 inhabitants but it has a very large ocean mass. At the same time, Seychelles is like a live laboratory. Within this holistic exemplarity of Seychelles, there is one jewel, which is the Aldabra Atoll.

The research boat - the Agulhas 2 - has 80 scientists on board with the latest and most modern technology to explore and investigate. We brought biological and chemical robots to investigate the water column.

SNA: What was expected going to Aldabra and what are some of the preliminary findings?

RC: We have a few different research programme — let me give you two examples. First, we have a programme studying plastic debris and its potential to carry viruses and invasive species. We collect the plastic debris, using the large manta ray filters. They are not easy to manage but we have done that in Mauritius and Reunion and on the way to Aldabra.

The other one is that Aldabra, just like other coral reefs in the world, suffers from coral bleaching. There was a decrease in the coral cover in the reef of Aldabra.

We have collected 60 different parts of corals and in partnership with the Seychelles Islands Foundation, we will study these corals and try to understand, through experiments, if some species are more resilient to climate change than others. At the same time, we will keep this coral safe in the oceanographic museum in Monaco. When there are other coral bleaching events, we will be able to not only give you back the corals but also tell you that be careful if you can plant and regrow this kind of species they will be more resilient against climate change than other species.

SNA: Where will you go next after Aldabra?

RC: After our trip to Mahe, the second leg will kick off and we will go southward. We will stop for 16 days at the Saya De Malha bank. Seychelles together with Mauritius, about five years ago, got the joint management of the Saya de Malha bank and it is very unexplored.

It won't be the first exploration, but it is clearly very unexplored, and nobody knows anything in detail about the Saya de Malha bank. It is the largest and deepest scientific mission on the Saya de Malha. We hope to discover what is in this very important seagrass meadow, which measures more than 40,000 square kilometers, roughly the size of Switzerland.

SNA: Will this mean a continued partnership between SIF and the Monaco Explorations?

RC: Exactly. We signed a memorandum of understanding between SIF, the scientific centre of Monaco, and the Oceanographic Institute of Monaco. Another kind of programme is the turtle identification programme. We captured some turtles and took very small tissue samples that will undergo DNA analysis. We also took blood samples from the turtle and put satellite transponders on the turtle to try and identify where the turtle will go.

SIF has already done this kind of investigation on adult turtles, but we are doing this on juveniles so that, together with SIF, we will understand where the juvenile will be going. These are juveniles that are about 1 year old, weighing about 5 kilos, and are both hawksbill and green turtles.

This collaboration has already started while we were on Aldabra, and it will continue. Another form of collaboration with SIF and the Seychelles authorities is that on the boat we have an oceanographic school - L'Institut de la Mer - and we have 30 students. On the boat, we have six Seychellois students, all female, and they will spend the two months of the mission with us and create some links with the international experts onboard and continue to do exchanges and be trained.

Around 13 Seychellois scientists and technicians will also be boarding the vessel and leaving Mahe to join the investigation on Saya De Malha - there will be a total of 40 people doing this investigation. There will be nine scientists from Mauritius. Another example of what we can do is, we have prepared this baseline study, which in fact consolidates any available information on this part of the western Indian Ocean. We have done that with an international committee of top-level scientists working on it.

SNA: What are some of the expectations for the Saya de Malha part of the exploration?

Clearly, the question is what is in Saya de Malha and what the two countries - Mauritius and Seychelles - have to do to have sustainable management of Saya de Malha? Maybe the solution will be to protect everything, but I do not think that will be the case.

It will be good to understand and have marine spatial management of Saya de Malha. Maybe some areas can be exploited whereas others must be protected, and we need to define that. Of course, Monaco Explorations won't take any decision on that one. We will only provide the data to the two governments, and they will analyze the data with us, and if it is necessary, Prince Albert II will support them in their decision.

For example, when it comes to the Saya de Malha bank, we know that there are very important seagrass meadows, and this is very important to capture the blue carbon, to capture carbon dioxide from the atmosphere and this could be valuable. There are some international mechanisms that could value this kind of blue carbon capture.

SNA: Seychelles is advancing a great number of projects dealing with environmental protection, mitigating climate change, and the Blue Economy. Can Seychelles do more to improve on what is already being done?

RC: There is the Blue Bond scheme that Seychelles put in place four or five years ago, in exchange to continue to protect your ocean which is part of our global ocean, and declaring 30 percent of your EEZ as a marine protected area. You received some financial support from the international community, and some blue bonds to invest in the Blue Economy. I think that those investments have been very successful. It is important for us to visit you and learn from you. Learn about what you have done and what can be done in other countries.

There are always things to do for improvement, but Seychelles is very active. I can only testify to what you have done and that what you continue to do is in the right direction.

Basically, it is also the positioning of Seychelles, you want to keep Seychelles as a jewel. Of course, tourism is very important for you, but you are at the same time selective when it comes to tourism. I do not want you to develop mass tourism and receive millions of tourists every year but to develop high-level tourism, and tourists that will appreciate the diverse biodiversity.

For example, for Aldabra. I think that there could be a way to develop tourism in the Aldabra region. The people can conduct one day visit to Aldabra carefully controlled. This is really the right balance - preserving nature and giving some value to nature. Nature is not only for the birds and fishes but also for the human, as we are part of it.

SNA: What is next after this exploration in Seychelles?

RC: We will of course continue the relationship with the Seychelles Islands Foundation. It should be noted that yesterday the President, Wavel Ramkalawan, expressed the willingness of Seychelles to share with Mauritius the possibility to control the water column in Saya De Malha.

For the time being, you have only what we call the extension of the continental shelf, which means that you have the management of what is on the seabed and what is below it, but you do not have any right or authority on the water column.

Even though the water column is not very big, it's important as the fish are located there. Today, it is internationally impossible to give this right to any country, so it will be difficult for Seychelles to get any rights, but I think, not only for Seychelles but for many countries it will be important to have this kind of right and to have to the possibility for the international community to not only control the seabed but also the water column.

In August, there was a very important conference in New York to try to improve the convention on the law of the sea called the Montego Bay Convention. It is a difficult process; we need to get the agreement of most of the countries in the world and clearly one of the subjects is to give the possibility for the international community to give to Seychelles and Mauritius the authority on the water column. Yesterday, Prince Albert II committed Monaco to work with Seychelles in that direction.

This means you will have the possibility to have the voice of Monaco, which is well-heard of when it comes to ocean matters. I dream to see Saya de Maya as the first marine protected area on the high seas, beyond national jurisdiction.