UN bracing for more displacements after Russian strikes in Ukraine 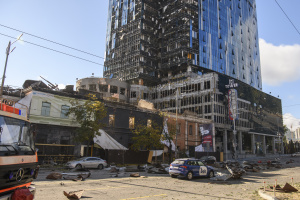 (AFP) - The United Nations refugee chief on Monday warned more people will be forced to flee their homes in Ukraine after Russian missiles rained down on Kyiv and other Ukrainian cities.

Moscow earlier on Monday unleashed the biggest wave of strikes across Ukraine in months in retaliation for an explosion this weekend that damaged a key bridge linking Russia to the Crimean peninsula.

The bridge is a symbol of the Kremlin's 2014 annexation of Crimea.

"The horror of what happened in Ukraine today... is inexcusable," UN High Commissioner for Refugees Filippo Grandi told journalists in Geneva.

"The bombing of civilians, of houses..., of non-military infrastructure in an indiscriminate manner in many cities across Ukraine, means the war is becoming harder and more difficult for civilians," he said.

"I fear that the events of these last hours will provoke more displacements."

Since Russia launched its full-scale invasion of Ukraine on February 24, more than 7.6 million Ukrainian refugees have been recorded across Europe.

While a number of those people have since returned, more than 4.2 million Ukrainians have registered for temporary protection status in EU countries.

Another nearly seven million people have also been displaced within the conflict-torn country, according to the UN's International Organization for Migration.

"My prognosis... is that we will mainly see internal displacements," he said, speaking on the sidelines of the UNHCR's prestigious Nansen Award ceremony, which this year went to former German chancellor Angela Merkel.

Grandi said the displacement situation in Ukraine at the moment was "extremely fluid".

"You have people who flee for only a few hours, to escape the bombs..., and then try to return home," he said.

But in situations where the destruction is greater, and people can no longer access heat or food, "I fear the displacements will last longer".