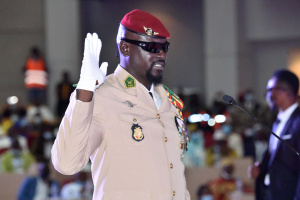 In this file photograph taken on October 1, 2021, Guinea's junta leader Colonel Mamady Doumbouya raises his hand at his swearing in ceremony as president of country transion, in Conakry. AFP learnt on September 12, 2022, that Mamady Doumbouya, head of the junta and of the state in Guinea, is the target of a complaint filed on September 8, in Paris for "complicity in torture" and "voluntary homicides" filed by opponents of the National Front for the Defense of the Constitution (FNDC). (Photo by Cellou BINANI / AFP)

(AFP) - The acting head of West Africa's regional bloc on Wednesday warned Guinea's ruling junta that the country faced "heavy sanctions" if it persisted in trying to stay in power for three years.

Three years in power before a return to civilian rule is "unacceptable for ECOWAS," Guinea-Bissau President Umaro Sissoco Embalo, who heads the Economic Community of West African States, said.

"Unacceptable and non-negotiable," he added, in an interview with France's RFI and France 24 broadcasters, a day before an ECOWAS summit on the sidelines of the United Nations General Assembly in New York.

The poor but mineral-rich nation has been ruled by the military since a coup in September 2021 that ousted president Alpha Conde, in power since 2010.

At the end of July, Embalo said he had recently convinced Guinea's junta to hasten the return to democracy.

The authorities have continued, however, to talk of a three-year transition period.

Embalo said in the interview that if the junta maintained that timetable, there would be sanctions "heavy sanctions, even".

The West Africa bloc is struggling with a string of military coups in the region in the past two years.

Mali underwent coups in August 2020 and May 2021, followed by Guinea in September 2021 and Burkina Faso in January.

The head of Guinea's military-dominated government Colonel Mamady Doumbouya was due in the Malian capital Bamako on Wednesday for talks with junta chief Colonel Assimi Goita.

The agenda for the visit was not made public.

ECOWAS has lifted tough sanctions that had been imposed on Mali's military regime, accepting a March 2024 return to civilian rule.

But Mali and Guinea remain suspended from ECOWAS bodies.