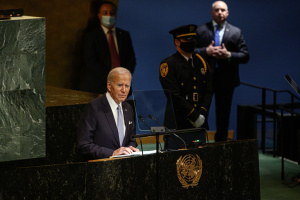 US President Joe Biden addresses the 77th session of the United Nations General Assembly at the UN headquarters in New York City on September 21, 2022. (Photo by Ed JONES / AFP)

(AFP) - US President Joe Biden tore into Vladimir Putin on Wednesday as he addressed the United Nations, saying the Russian leader "shamelessly violated" the UN Charter when he invaded neighbor Ukraine.

"Russia has shamelessly violated the core tenets of the United Nations Charter," Biden said as he addressed the annual UN General Assembly in New York.

Russian forces have attacked Ukrainian schools, railway stations and hospitals, as part of Moscow's aim of "extinguishing Ukraine's right to exist as a state," Biden said.

While delivering a rebuke to the Kremlin, Biden notably reached out to rivals on issues he said were of global importance, including climate change and nuclear arms control.

"A nuclear war cannot be won, and must never be fought," Biden said.

"We are seeing disturbing trends. Russia (is) making irresponsible nuclear threats to use nuclear weapons," he said.

However, "the United States is ready to pursue critical arms control measures."

While once again vowing that Washington will not allow Tehran to obtain atomic weapons, Biden also underlined that "diplomacy is the best way to achieve this outcome."

Biden's language was likewise relatively mild on China, the biggest geopolitical and economic rival to the United States.

He said that while "the United States will be unabashed in promoting our vision of a free, open, secure and prosperous world," it will not force countries to "choose" sides.

The US president expanded his cooperative message in addressing a longtime demand from developing economies around the world to be included in the UN Security Council, which currently only has five permanent members -- Britain, China, France, Russia and the United States.

"The United States supports increasing the number of both permanent and non-permanent representatives of the council," Biden said.

Turning again to Iran, where rare protests have broken out over the death of a young woman arrested by the state's morality police, Biden said Americans "stand with the brave women. of Iran."

"Today we stand with the brave citizens and the brave women of Iran who right now are demonstrating to secure their basic rights," he said.