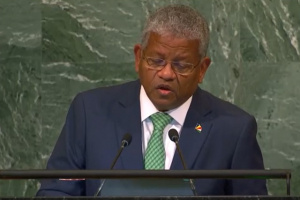 Ramkalawan in his address at the 77th session of the United Nations General Assembly debate on Tuesday. (UN WebTV)

(Seychelles News Agency) - The Seychelles' President, Wavel Ramkalawan, has reiterated the call of small islands developing states (SIDS) for a globally accepted vulnerability assessment in his address at the 77th session of United Nations General Assembly debate on Tuesday.

Ramkalawan said that economic equity is the biggest impediment to the realisation of the sustainable development goals.

"The blueprint for a better and sustainable future requires financial resources that many of us simply do not have or are unable to access since development cooperation modalities failed to consider vulnerability as a barrier to durable development," he added.

The Seychelles' head of state said that time and again small island developing states have consistently reiterated the call for a globally accepted vulnerability assessment put forward in 1992 by the United Nations Conference on environment and development.

"Our island nations have experienced the greatest economic loss from the pandemic with economic contraction averaging 7 percent yet very few of us were able to access the meagre 6 percent of COVID-19 funding allocated to developing countries," he added.

Ramkalawan said that there was a need to be reminded that "multilateralism gives each one of us the opportunity and the means to solve complex challenges that we cannot overcome on our own. Never have we faced challenges of such magnitude. A world in deep crisis, climate inaction, the aftermath of the pandemic, food insecurity, the rising cost of energy, the war in Ukraine."

These inter-related challenges that the least responsible for are most affected by and the plight of states in vulnerable situations have never been more pronounced.

"As floods, heatwaves and fires in the western world dominate the news and our social media feeds, let us not neglect nor forget that the impact of slow onset events like sea level rise poses existential threats to small island developing states," Ramkalawan said.

He said that Seychelles, an archipelago in the western Indian Ocean, can attest to this fact as its shores and sea have become encumbered with plastic waste.

Despite the challenges Seychelles face, the island nation has taken several measures to protect its ocean territory of 1.4 million square km.

"Healthy oceans are critical to life on earth and as a foremost proponent of the Blue Economy paradigm, Seychelles has taken bold steps to sustainably harness our ocean for the benefit of our people," he said.

Seychelles has designated 30 percent of its ocean territory as a Marine Protected Area, a total of 410,000 square kilometres of its Exclusive Economic Zone (EEZ), under the National Parks and Nature Conservancy Act.

The island nation has also committed to protect at least 50 percent of its seagrass ecosystems by 2025 and 100 percent by 2030 greatly contributing to ecosystem preservation.

He called on small island states and ocean states to be as bold in their ocean commitment.

Ramkalawan also talked about food security and energy security which have been exacerbated by the conflict in Ukraine.

"The challenge for us in Africa is how to guarantee that trade contributes meaningfully to food security.  In this regard, the African Continental Free Trade area has a vital role to play by stimulating intra-trade amongst ourselves by ensuring that we redistribute food produced from regions with a surplus to regions facing deficits," he said.

He said that the solutions to food security can be achievable.

"We firmly believe that harnessing the potential of the Blue Economy by tapping into fisheries and aquaculture resources can be a viable option to address food and nutrition insecurity that prevails at the moment," said Ramkalawan.

He concluded by saying that "we share only one planet and our fates are indivisible and let us secure a better future together."