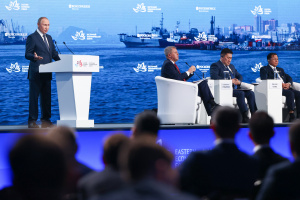 Washington and Brussels have pummelled Moscow with a barrage of economic and personal sanctions after Putin sent troops into Ukraine on February 24.

Facing deteriorating ties with Western capitals, Moscow is seeking to pivot the country towards the Middle East, Asia and Africa.

"No matter how much someone would like to isolate Russia, it is impossible to do this," Putin told the Eastern Economic Forum in Russia's Pacific port city of Vladivostok.

He said the coronavirus pandemic has been replaced by other global challenges "threatening the whole world", including "sanctions fever in the West".

Putin has repeatedly insisted that Russia's economy is weathering the barrage of sanctions well, as the Kremlin's ties with the West sink to new lows.

As Moscow seeks to instead bolster ties with Asia -- especially key ally China -- Putin welcomed the growing role of the Asia-Pacific region in global affairs.

"The role... of the countries of the Asia-Pacific region has significantly increased," he said at the forum, adding that partnerships will create "colossal new opportunities for our people".

Putin was joined at the forum by China's top legislator Li Zhanshu -- who ranks third in the Chinese government hierarchy -- with a bilateral meeting scheduled for later in the day.

Putin hailed Myanmar as a "long-standing and reliable partner", while Min Aung Hlaing called the Russian president "a leader of the world".

Putin's participation in the forum in the Far East -- a region with close geopolitical and economic ties to Russia's Asian neighbours -- comes a day after the Russian president oversaw large-scale military drills there.

The week-long manoeuvres, called Vostok-2022, were concluding on Wednesday and involved several Kremlin-friendly countries, including China.

Putin is expected next week to hold an in-person meeting with Chinese counterpart Xi Jinping, who has not left China since 2020 due to the coronavirus pandemic.

The two leaders will meet at a summit of the Shanghai Cooperation Organisation (SCO) held in Uzbekistan on September 15 and 16, a Russian diplomat said Wednesday.

Beijing and Moscow have drawn closer in recent years, ramping up cooperation as part of what they call a "no limits" relationship, acting as a counterweight to the global dominance of the United States.

Beijing has refused to condemn Moscow's intervention in Ukraine and provided diplomatic cover by blasting Western sanctions and arms sales to Kyiv, heightening tensions between China and the West.

Tensions were further strained during the August visit of US House Speaker Nancy Pelosi to self-ruled, democratic Taiwan, which China considers its territory.

Moscow was in full solidarity with Beijing during the visit, with Putin accusing Washington of "destabilising" the world.

In a sign of further rapprochement, Russia announced Tuesday that China will be switching from US dollars to the national currencies of the two countries -- yuan and rubles -- to pay for deliveries of Russian natural gas.

Putin said Wednesday that "confidence has been lost" in US dollars, euros and British pounds, and Russia is distancing itself from such "unreliable, compromised" currencies.