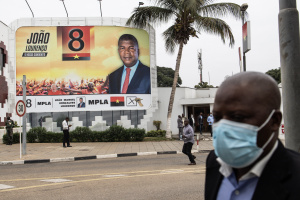 A man walks past a campaign poster at the People’s Movement for the Liberation of Angola (MPLA) party headquarters, two days after general elections, in Luanda on August 26, 2022. Angola is awaiting for the announcement of the results of the August 24 general elections, which will decide the next president, with counts indicating a probable victory for the historic ruling MLPA party in the country's most hotly contested election in its democratic history. (Photo by JOHN WESSELS / AFP)

Dos Santos, who ruled Angola with an iron fist for 38 years, died on July 8 at a hospital in Spain after suffering a cardiac arrest.

He will be buried at a state funeral on Sunday, on what would have been his 80th birthday.

It is set to be attended by about a dozen foreign leaders, including the presidents of Portugal, Mozambique and South Africa.

A brown casket carrying dos Santos's body and draped with the Angolan flag left his house in the capital Luanda for the city's central Praca da Republica plaza.

The coffin will lie in state in a tent for the public to pay their last respects.

Religious chants echoed through loudspeakers in the vast plaza, where there were are black flags and posters paying homage to "Zedu" -- dos Santos's nickname.

About 20 women wept, chanting the name of the man whose tenure was marred by allegations of sweeping nepotism and plunder of the oil-rich state's resources.

A few family members and government officials accompanied the casket to the square, but none of his children were present.

Some of his children were at loggerheads with the government and his estranged wife over where and when he was to be buried.

But a Spanish court last week ruled that the body be returned to his wife in Angola.

His eldest daughter Isabel dos Santos, who has faced a slew of investigations into her multinational business dealings, last week wrote on Instagram that she would not be able to see her father to final resting place.

The funeral comes as dos Santos's MPLA party notched up its worst electoral performance in this week's polls.

After 97 percent of the results were tallied, an initial count showed the MPLA had won 51.07 percent of the vote, against 44.05 percent of its main rival, the National Union for the Total Independence of Angola (UNITA).

UNITA -- which fought a bitter 27-year civil war against the MPLA government -- has rejected the results and wants a review led by an impartial international panel.