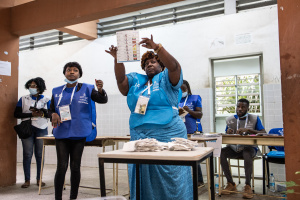 An election official holds up a ballot paper as votes are counted at a polling station in Luanda on August 24, 2022, during Angola's general elections. Angolans started casting ballots on August 24, 2022 in what is expected to be the most competitive vote in its democratic history, with an incumbent president squaring up against charismatic opposition leader. (Photo by JOHN WESSELS / AFP)

Angola's Joao Lourenco was set to remain president Thursday, as his party maintained its lead in the country's most hotly contested election in its democratic history, with nearly all the votes counted.

Results published by the country's electoral commission gave the People's Movement for the Liberation of Angola (MPLA) 51.07 percent of the vote with more than 97 percent of ballots tallied.

This is significantly lower than its previous performance where it garnered 61 percent.

The main opposition group, the National Union for the Total Independence of Angola (UNITA), led by Adalberto Costa Junior, stood at 44.05 percent -- a huge jump from 26.67 percent in the 2017 election.

The leader of the winning party automatically ascends to the presidency in the oil-rich former Portuguese colony.

A senior member of the opposition party and former rebel movement told a news conference that the official results did not tally with their own parallel count.

"We hope there can be common sense, we are not encouraging a rebellion, the process is not over, we must remain calm," said Anastacio Ruben Sicato.

Its parliamentary share of seats dropped to 124 from 150 in the last election, while UNITA's nearly doubled to 90 from 51 of the 220 parliamentary seats up for grabs.

- 'Always the same story' -
The MPLA has ruled Angola for nearly 50 years since the country gained independence in 1975, before a civil war erupted, lasting 27 years and claiming at least 500,000 lives.

Multi-party elections in Angola were introduced in 1992.

But the MPLA's Jose Eduardo dos Santos, first elected in 1979, remained in office until 2017, when Lourenco succeeded him for a first five-year term.

The latest election has been overshadowed by a struggling economy, inflation, poverty and drought, compounded by dos Santos' death last month in Spain.

Residents in the oceanside capital Luanda reacted with mixed feelings to the preliminary results.

"I voted for UNITA, and I do not believe in these results," said Jorge, a 40-year-old mechanic who did not give his surname, accusing the electoral commission of being in cahoots with the ruling party.

"The country is not going to change, it's always the same story."

Lourenco, a 68-year-old former general educated in the Soviet Union, is credited with far-reaching reforms since taking power.

These include boosting financial transparency and efficiency, fighting sweeping nepotism and corruption, and promoting business-friendly policies to lure foreign investors.

Critics say his anti-graft crusade is one-sided and aimed at settling political scores, targeting children and cronies of his predecessor.

- Fears of tampering -
But his party supporters exude pride in the formerly Soviet-backed party.

"I am happy, the MPLA has given young people opportunities, there is more work and transparency," said 27-year-old shopkeeper Madalena Antonio, commenting on the early results.

"The government did what it could do. Things will get better."

The MPLA has traditionally wielded control over the electoral process, and state media and opposition and civic groups have raised fears of voter tampering.

Results in past elections, including 2017, have been contested -- a process that can take several weeks.

UNITA's deputy leader Abel Chivukuvuku said earlier that the party's own tally showed it was ahead.

There is a "clear provisional indication of a winning trend for UNITA in all provinces," he told a live streamed press conference late Wednesday.

More than 14 million people were registered to vote.

A team of observers from the Community of Portuguese-Speaking Countries (CPLP) declared the election to have been organised in "accordance with international requirements" and Angolan laws.

Dos Santos will be buried on Sunday, which would have been his 80th birthday.