Ukraine will fight 'till the end', Zelensky vows on Independence Day 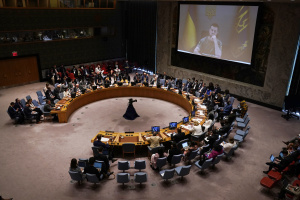 Ukrainian President Volodymyr Zelensky appears on screen before addressing the UN Security Council Meeting on the maintenance of peace and security of Ukraine on August 24, 2022, at UN headquarters in New York. (Photo by TIMOTHY A. CLARY / AFP)

(AFP) - President Volodymyr Zelensky vowed on Wednesday that Ukraine will resist the Russian invasion "until the end" without "any concession or compromise", as the nation marks its Independence Day as well as the six-month anniversary of the start of the war.

"We don't care what army you have, we only care about our land," Zelensky said in a defiant morning video address. "We will fight for it until the end."

Referring to Russia -- which launched a large-scale attack in the early hours of February 24 -- he vowed Ukraine "will not try to find an understanding with terrorists".

"For us Ukraine is the whole of Ukraine," he said. "All 25 regions, without any concession or compromise."

Meanwhile on Wednesday, the US is set to announce $3 billion in fresh military aid to Kyiv on the date it severed ties with the Soviet Union in 1991.

The new tranche of American funding will help Kyiv acquire more weaponry, ammunition and other supplies for its armed forces, locked in a grinding war of attrition with Russian troops in the east and south with neither side advancing significantly in weeks.

The planned White House announcement comes as Washington warned Moscow could be planning a surge in strikes on civilian targets coinciding with Independence Day observations.

Gatherings have been banned in the capital Kyiv, where air raid sirens sounded in the morning, and Zelensky has urged citizens to be on guard against "Russian terror".

As the war entered its seventh month with no end in sight, British Prime Minister Boris Johnson pledged unlimited assistance to Ukraine.

"People are fighting with steel, with courage to defend their homes and their families, and to preserve their right to decide their own destiny in their own country," he said in a video message on Wednesday morning.

"However long it takes, the United Kingdom will stand with Ukraine and provide every possible military, economic and humanitarian support."

On Tuesday, German Chancellor Olaf Scholz warned Russia against further attempts to annex Ukrainian territory in the same way it did the Crimean peninsula in 2014.

Polish President Andrzej Duda also advised against any "appeasement", saying: "There is no return to business as usual in relations with Russia."

In an absurd message on Wednesday, the authoritarian leader of Belarus -- which offered its territory as a staging ground for Russia's invasion -- gave congratulations to Ukraine on its Independence Day.

"I am convinced that today's contradictions will not be able to destroy the centuries-old foundation of sincere good neighbourly ties between the peoples of our two countries," Alexander Lukashenko said in a statement.

In the early days and weeks of Russia's invasion, Kyiv was under siege by Russian troops which reached the suburbs of the capital.

Moscow's offensive quickly faltered, and its forces withdrew in late March to regroup for assaults on Ukraine's east and south.

But in the capital, Ukrainians were sombre about the anniversary after a half-year of death and destruction.

"Six months, the peace of life has been broken in every family," Nina Mikhailovna, an 80-year-old pensioner, said at Independence Square in central Kyiv, on Tuesday.

"How much destruction, how many dead, how can we relate to it?" she asked.

Kyiv's city administration said it would shut public service centres on Wednesday and Thursday, and shopping malls said they would close for the anniversary for safety concerns.

Meanwhile, discussions continued on how to protect the Zaporizhzhia nuclear plant in southern Ukraine, occupied by Russian troops and threatened by shelling, which Moscow blames on Kyiv.

The two sides traded accusations at a Tuesday meeting of the UN Security Council on Zaporizhzhia, with Ukraine and its allies demanding Russia pull its troops out of the plant -- Europe's largest nuclear facility -- and agree to a demilitarised zone.

Russian Foreign Minister Sergei Lavrov spoke on Tuesday by telephone to French counterpart Catherine Colonna about an expected visit to the plant by inspectors from UN nuclear watchdog the International Atomic Energy Agency (IAEA), amid worries over the high risk of a radiation accident.

"I'm continuing to consult very actively and intensively with all parties so that this vital IAEA mission can take place without further delay," he said.

It would "help stabilise the nuclear safety and security situation at the site and reduce the risk of a severe nuclear accident in Europe".