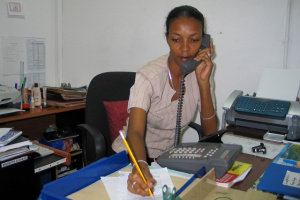 The government and civil society partners are seeking to establish the necessary mechanisms to report harassment and abuse in Seychelles' workplaces (Archive photo: Joe Laurence)

(Seychelles News Agency) - Preventing different forms of abuse of employees in the workplace was the subject of a meeting held at the Seychelles Trading Company (STC) conference centre on Monday, as some deficiencies exist in the current laws and practices to protect victims.

“This is the first step towards ensuring workers are safe in their place of employment and that they are not victims of abuse,” said the principal secretary for tourism, Sherin Francis, in her opening address at a workshop to establish the necessary mechanisms to report abuse in the workplace.

“The problem of abuse is not one that will be solved overnight, but establishing the necessary mechanisms to report such instances is a start to tackling the issue and finding solutions,” she added.

Representatives from a committee set up earlier this year to deal with issues of abuse in the tourism industry as well as others concerned with working conditions, such as the Attorney General’s office and the Employment Department, attended the event.

Initially, the Tourism Department had set up the committee to determine what was the cause of a lack of productivity in the sector.

“We realised that abuse in the workplace was also affecting some of the workers’ productivity,” she explained.

Furthermore, Seychelles’ economy – an archipelago in the Western Indian Ocean – is heavily reliant on the tourism sector.

There are some 17,000 employees in the sector consisting of both Seychellois nationals and foreign workers.

Employment Department official Ronny Baker said these complaints included issues of employees being paid below the minimum wage or that they were not receiving necessary protective gears.

While Seychelles laws currently make provisions for addressing abuse in some areas in the workplace, there are new challenges that have come up that the law needs to address.

Facilitator at the workshop, Tessa Henderson, put forward to the participants that they should think about how to deal with harassment on social media and how to protect whistle-blowers who bring attention to the workplace.

“We as a union are often dealing with the various cases of harassment that workers bring to our attention,” said Robinson.

As sexual harassment is also one of the abuses talked about, Robinson said that he realised “that as it is a bit more delicate to deal with. People tend to avoid talking about it”.

Meanwhile, the United Nations has highlighted in its report that the current laws in the island state are lacking in certain areas – including the necessary tools to report cases of abuse.

Robinson said that this could be partly dealt with by “ratifying the ILO [International Labour Organisation] 2019 convention”.

“The convention will provide us with various tools to incorporate in our own laws, regulations and policies to ensure that we have a good law that is human and is in the best interest of all those concerned,” he explained.