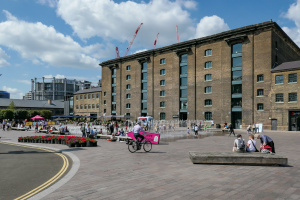 A sunny summer day with high temperatures during a heatwave in London, UK, on August 1, 2019. People including adults and children playing with the water in a dancing fountain at Granary Square, Kings Cross. In July 2019 London city and other cities in Europe had the highest ever measured temperature and the hottest day, a historical record high showing climate and weather change. (Photo by Nicolas Economou/NurPhoto) / NurPhoto via AFP / NurPhoto / Nicolas Economou)

(AFP) - People in England were urged Tuesday to use water "wisely" to protect supplies and the environment, after the Met Office said the previous eight months had been among the driest on record.

The advice, from the Environment Agency, came after it convened a "national drought group" comprising senior decision-makers from the agency, government, water companies, and other interested parties to discuss the current conditions.

England and parts of Wales are severely parched following months of record low rainfall and unprecedented temperatures in recent weeks.

A punishing heatwave that swept western Europe last week pushed temperatures in Britain over 40 degrees Celsius (104 degrees Fahrenheit) for the first time ever.

The participants in Tuesday's meeting "agreed actions to protect water resources and the environment in the UK in the weeks ahead," the Environment Agency said.

"There are currently no plans for restrictions on essential water use," said Harvey Bradshaw, its executive director for environment.

But, noting that English rivers were "exceptionally low", he asked households to reduce "unnecessary water consumption".

Earlier, the Met Office, the UK's meteorological authority, said its statistics for November to July for England and Wales showed it was the driest period apart from a record spell in 1976.

Most of England has moved into "prolonged dry weather" status, the Environment Agency said, meaning it is now taking precautionary actions to mitigate impacts "as hydrological conditions deteriorate".

These include enhancing its monitoring and protection of water resources, alongside the water companies.

Nowhere in England is currently considered to be "in drought" and most water companies are maintaining good reservoir storage for summer demand, the agency noted.

But further measures which could be required include temporary use bans -- more commonly known as hosepipe bans -- which would be decided by individual water companies serving different areas.

"Water companies have detailed plans in place to manage water resources for customers and the environment, and are doing everything they can," said Stuart Colville, director of policy at Water UK, which represents the industry.

"As we continue to see extremely high demand, we are urging everyone to carefully consider the amount they are using given the unprecedented conditions."