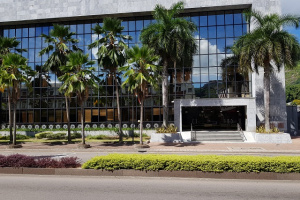 Abel told a press conference that indications show that current global realities are not going away any time soon.(Betymie Bonnelame, Seychelles News Agency)

The government, public and businesses need to be clearly aware of global events and take them into consideration when making monetary decisions, advised the governor of the Central Bank of Seychelles (CBS) on Thursday.

Caroline Abel told a press conference that indications show that current global realities are not going away any time soon.

"Global crises are continuously deteriorating and projections are already showing that 2023 will be bad as well, especially if the war and health situations do not improve," she said.

Abel said that "it is important that policies put in place are balanced and that they do not bring a negative impact, causing the country to lose resources at a time when the economy might become even more fragile. Decisions that are taken by all authorities, including the Central Bank of Seychelles, will be decisions that at times might be difficult."

If inflation rates both locally and globally continue to increase, there are chances that CBS will have to tighten its monetary policies and will have a negative impact on the country.

The International Monetary Fund (IMF) on Tuesday described the world's economic outlook as gloomy and more uncertain and predicted growth to slow down to 3.2 percent in 2022, 0.4 percentage points lower than in the April 2022 World Economic Outlook. This means that globally people will have less spending power.

Global health emergencies, the Russia-Ukraine war, inflation and climate change are all factors contributing to the current global recession.

Asked about the timing of the government's announcement that it will provide financial assistance to a section of the population until December and employees are guaranteed 50 percent of their 13th-month salary in January, Abel said this has been made possible through the government's ability to create fiscal space.

"We know that with the current economic reality, SCR 500 ($39) is not enough, but the government has not been able to give more as it does not have enough resources in its budget. Giving more means that the government would have had to lend the resources, however, the government does not necessarily have the ability to lend as it has to continuously reduce its debts that are still high," said Abel.

Figures showed that although there has been an increase in demand for foreign exchange compared to supply from January 1 to July 26, Seychelles has been able to retain $18 million in the economy.

Abel outlined that demand has grown in the past three months as commodity prices continue to increase internationally.

Tourism and fisheries remain the two top sectors bringing the most foreign exchange into the island nation in the western Indian Ocean.