Firearms case: Supreme Court yet to decide whether to allow unsupervised meetings of Valabhji couple 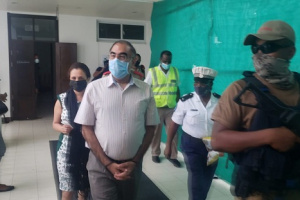 The presiding judge is yet to decide on whether businessman Mukesh Valabhji (middle) and his wife Laura can meet without a lawyer to plan their defence. (Rassin Vannier, Seychelles News Agency)

(Seychelles News Agency) - The Supreme Court of Seychelles has further detained three out of the five persons accused in the ongoing illegal arms and ammunition case concerning primarily businessman Mukesh Valabhji and his wife Laura, while considering whether the two can meet without a lawyer to plan their defence.

Apart from the Valabhji couple, three other persons have been charged in the possession of firearms case for several charges under the Penal Code, Prevention of Terrorism Act, Firearms and Ammunition Act.

Leslie Benoiton, Mukesh and Laura Valabhji remain in police custody while the others have been released on bail and will only have to appear in court on December 1 – the date set for the trial.

The presiding judge, Chief Justice Rony Govinden, said he will give his decision on whether the Valabhji couple can meet without supervision on June 28 – the date set for the three accused to reappear before the court.

This decision follows the prosecution's reply to an affidavit, brought forward by the defence asking for the Valabhji co-defendants to be able to meet and discuss their defence strategy.

Prosecutor Stephen Powles said that his side had no issues with the requests made in the affidavit, although he pointed out "that a line should be drawn when allowing the two to meet without lawyers or police supervising the visits."

While listening to the arguments from both sides, Govinden pointed out that "lawyers are not there as supervisors but rather to take instructions from their clients."

This is not the first time Laura Valabhji has complained to the courts that her rights to meetings were not being respected – which is why she made the request so as to have a court order of the proper protocols.

The five accused were arrested after a cache of military arms and ammunition was found at the Valabhji couple's residence in the western Mahe district of Port Glaud during a search, after they had been arrested in a money laundering case. The second case concerns $50 million granted to the government of Seychelles by the United Arab Emirates in 2002 that went missing, for which they face money laundering charges.

Benoiton was arrested shortly after the couple, while Marie - a former bodyguard of the late President France Albert Rene - and retired Brigadier Payet were the most recent persons arrested in connection to the case on December 29.