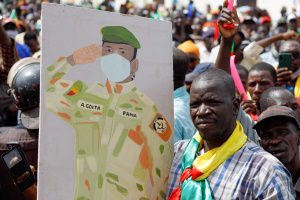 A supporter of Malian Interim President Assimi Goita holds up his image during a pro-Junta and pro-Russia rally in Bamako on May 13, 2022. Several hundred Malians have gathered in Bamako to support the junta, the army and military cooperation with the Russians, AFP journalists report. (OUSMANE MAKAVELI / AFP)

(AFP) - Mali's military rulers announced on Monday they would delay until March 2024 a return to civilian rule following double coups that have been denounced by countries in the region and foreign powers.

Junta leader Colonel Assimi Goita signed a decree read out on state television saying that "the duration of the transition is fixed at 24 months (from) March 26, 2022".

Its military rulers had pledged to return power to civilians by February 2022 but subsequently extended the timetable, incurring regional sanctions.

Mali is struggling under those sanctions imposed by other countries in West Africa for its perceived foot-dragging over restoring civilian rule.

Anger at the mounting toll in the country's battle against jihadists unleashed protests against Keita, paving the way for the coup by disgruntled army officers in August 2020.

A second de-facto coup occurred in May 2021, when strongman Goita pushed out an interim civilian government and took over the presidency.

The violence gripping Mali since 2012 has involved attacks by jihadists linked to Al-Qaeda and the so-called Islamic State group, but also an assortment of self-declared militias and bandits.