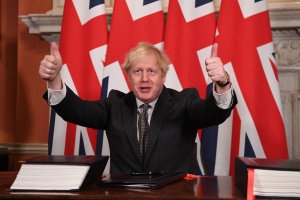 (FILES) In this file photo taken on December 30, 2020 Britain's Prime Minister Boris Johnson gives a double thumbs up after signing the Trade and Cooperation Agreement between the UK and the EU, the Brexit trade deal, at 10 Downing Street in central London. British Prime Minister Boris Johnson won a no-confidence vote triggered by his Conservative MPs, on June 6, 2022, and will stay on as leader, but the scale of the rebellion leaves his future in doubt. (Leon Neal / POOL / AFP)

(AFP) - British Prime Minister Boris Johnson on Monday survived a vote of no confidence from his own Conservative MPs but with his position weakened after a sizeable number refused to back him.

The Brexit figurehead called the 211-148 split a "convincing result, a decisive result".

"As a government we can move on and focus on the stuff that really matters," he told reporters.

The vote -- just over two years after he won a landslide general election victory -- was brought after a string of scandals that have left the Tory party's standing in tatters.

Chief among them was the "Partygate" controversy over lockdown-breaking events at Downing Street, which caused public outrage and saw him become the first serving UK prime minister to have broken the law.

Johnson, 57, needed the backing of 180 MPs to survive the vote -- a majority of one out of the 359 sitting Conservatives in parliament.

Defeat would have meant an end to his time as party leader and prime minister until a replacement was found in an internal leadership contest.

Speculation will now turn to whether Johnson can survive having lost the confidence of so many of his own MPs -- and whether senior ministers will now resign.

In previous Tory ballots, predecessors Margaret Thatcher and Theresa May both ultimately resigned despite narrowly winning their own votes, deciding that their premierships were terminally damaged.

"The Conservative government now believes that breaking the law is no impediment to making the law," the main opposition Labour leader Keir Starmer said.

"The Conservative party now believes the British public have no right to expect honest politicians."

The vote dominated British newspaper front pages Tuesday, with The Times describing Johnson as "A wounded victor" and pointing out that his margin of victory was less than that of his predecessor May, who was ousted months later.

Under the headline "Hollow victory tears Tories apart," The Daily Telegraph said Johnson was "clinging to power" while The Financial Times said the margin of his victory "left him badly damaged and exposed the scale of the division and animosity in his party."

"PM clinging to power after vote humiliation," The Guardian said, while The Daily Mirror, which helped break the "Partygate" story, simply said "Party's over, Boris."

The Daily Mail was among the few supportive papers, saying "Boris vows: I'll bash on."

Johnson has steadfastly refused to resign over "Partygate".

He earlier defended his record on delivering Brexit, fighting the Covid pandemic and Britain's hawkish support for Ukraine against Russia.

"This is not the moment for a leisurely and entirely unforced domestic political drama and months and months of vacillation from the UK," he told Tory MPs, according to a senior party source.

"We have been through bumpy times before and I can rebuild trust," the prime minister told his parliamentary rank and file, according to the source, adding: "The best is yet to come."

Supporters cheered and thumped their tables in approval.

The source said Johnson had indicated tax cuts could be in the offing as Britain contends with its worst inflation crisis in generations.

But the scale of Tory disunity was exposed in a blistering resignation letter from Johnson's "anti-corruption champion" John Penrose and another letter of protest from long-time ally Jesse Norman.

The prime minister's rebuttals over "Partygate" were "grotesque", Norman wrote, warning that the Tories risked losing the next general election, which is due by 2024.

Ex-cabinet member Jeremy Hunt, who lost to Johnson in the last leadership contest in 2019 and is expected to run again if Johnson is deposed, confirmed he would vote against him.

"Conservative MPs know in our hearts we are not giving the British people the leadership they deserve," Hunt tweeted.

After a dismal showing in May local elections, the party is expected to lose two by-elections this month, one of them in a previously rock-solid Conservative seat.

That is focusing the minds of Tory lawmakers, who fear their own seats could be at risk if Johnson leads them into the next election.

In a snap poll by Opinium Monday of 2,032 people, 59 percent of respondents said the Tories should ditch him as leader.

Among Conservative members, 42 percent want MPs to fire Johnson, according to another poll by YouGov.

Johnson was booed Friday by sections of an ardently patriotic crowd gathered outside St Paul's Cathedral, ahead of a religious service for Queen Elizabeth II's Platinum Jubilee.

For wavering Tories, the barracking at a televised national occasion reportedly marked a turning point. Some said they had held back on public criticism of Johnson until after the jubilee.

But cabinet ally Jacob Rees-Mogg dismissed the booing as "muted noise" and insisted that Johnson could survive with the slenderest of majorities.