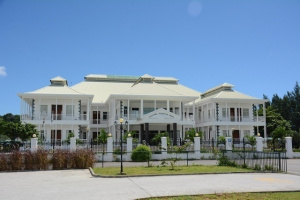 Pillay has now called on his colleagues in the National Assembly to support a motion, which he will bring forward. (Seychelles News Agency)

The Leader of the Opposition in the Seychelles National Assembly, Sebastien Pillay, of the United Seychelles Party (US) will be bringing a motion to call for the resignation of the Minister for Transport, Antony Derjacques, for misleading the parliament concerning his involvement in the contract with Swiss company Travizory.

"In my hand, I have the document of the law chamber, Ferley and Associates, and in there, the name of Minister Derjacques appears as an associate. This means that the chamber of Minister Derjacques, who is responsible for the Travizory dossiers, is also acting as legal advisor to Travizory. This is a violation and a lack of honesty on the part of the ministers," said Pillay.

Pillay said that Derjacques did not state his interest in the platform and this "showed that there could be some sort of collusion between Travisory and the minister's office."

The Seychelles Travel Authorisation online portal, managed by Travizory, provides a mandatory travel document of the same name that all visitors must submit to enter the island nation to provide evidence online that they are COVID-19 free. In place since September 2020, the system provides a digital border-crossing experience that has helped the country to re-open its tourism industry.

Pillay has now called on his colleagues in the National Assembly to support a motion, which he will bring forward, asking for the resignation of the minister.

"I ask my colleague on the side of the table to support this motion, as we feel that he misled the national assembly and this shows an abuse of his position as minister," Pillay said.

In giving his decision, the Speaker of the National Assembly, Roger Mancienne, explained that not giving information is not misleading but he recognised that in so doing "creates doubts and leaves the road open to allegations. So I understand if the opposition wants to continue to ask questions on the subject."

Mancienne said that the Leader of the Opposition has the right to bring his motion on the subject.

The government of Seychelles entered into a 10-year contract with a Swiss-based company known as Travizory Border Security on March 18, 2021 and Pillay said that since March, he requested that the National Assembly get a copy of the contract.

Last Wednesday, the Speaker of the National Assembly, Roger Mancienne, announced that he had received the document but in view of the fact that it contains a confidentiality clause, he had to ensure how best it is circulated among parliamentarians so that it does not reach the public domain.

In the National Assembly elections of October 22-24, the United Seychelles Party (US) was elected in six districts and secured four proportional seats and, therefore, has 10 seats.

The Linyon Demokratik Seselwa (LDS) has a large majority after winning 20 out of 26 constituencies with five seats for proportional members, bringing the party's total to 25 seats out of the 35-member body.

Seychelles, an archipelago in the western Indian Ocean, got the highest in Africa on the Corruption Perception Index (CPI) survey released in January.