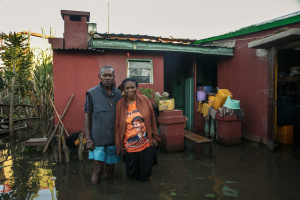 Retired Ulrich Tsontsozafy, 66, and his wife Juliette Etaty, 65, housewife, pose in front of their flooded house in the 67-hectare Ankasina neighbourhood in Antananarivo on Januray 28, 2022 as Madagascar suffered flooding caused by a severe storm. Torrential rains from deadly Tropical Storm Ana subsided on Friday leaving tens of thousands of people across three countries in southern Africa cut off by flood damage, without power and living in shelters. The death toll stood at 86 across Madagascar, Mozambique and Malawi, as rescue crews battled on to access regions where roads and bridges had washed away. (RIJASOLO / AFP)

(AFP) - Tropical storms and cyclones have killed at least 214 people and affected more than half a million in Madagascar this season, the United Nations said Tuesday.

"Six tropical weather systems hit Madagascar from January to April 2022, killing at least 214 people and affecting about 571,100 across the country," the humanitarian agency OCHA said.

One of the poorest nations in the world, Madagascar is prone to numerous storms and cyclones between November and April every year.

It was battered by one storm after another this year.

Between both, Tropical Storm Dumako lashed the northeast in mid-February, killing 14 people in floods.

Madagascar's southern region has also been ravaged by drought, leading to malnutrition and pockets of famine.

"By the end of February, more than 61 percent of the Grand Sud's territory remained affected by extreme or emergency drought," OCHA said, citing the UN children's agency UNICEF.

Thanks to humanitarian assistance, "food insecurity and malnutrition in the Grand Sud improved in the first quarter of 2022," it added. But the situation remained fragile, with seven of 10 districts still in crisis.