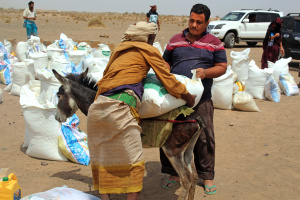 Poor Yemeni families receive flour rations and other basic food supplies like rice, oil and sugar, from charities in the province of Lahj, in southern Yemen, on March 29, 2022, as food prices have doubled since last year and the fact that Ukraine supplies nearly a third of Yemen's wheat imports has heightened fears of a deepening famine. The disruption in export flows resulting from Russia's invasion and international sanctions has spurred fears of a global hunger crisis, especially across the Middle East and Africa, where the knock-on effects are already playing out. The toll is most evident in conflict zones such as Yemen, the Arab world's poorest, where a devastating war since 2014 has sparked one of the world's worst humanitarian crises. (Saleh Al-OBEIDI / AFP)

(AFP) - The chairman of the African Union warned EU leaders Tuesday that their decision to expel Russian banks from the SWIFT financial messaging system risks hurting food supplies to the continent.

The war in Ukraine and Russia's blockade of its neighbour's ports, combined with African conflicts and climate change, have already sent world cereal prices surging and exacerbated food crises in Africa.

On Tuesday, Senegalese President and AU leader Macky Sall warned Europe that its banking sanctions -- part of a raft of EU sanctions aimed at forcing Russia to abandon its invasion -- aren't helping.

Speaking by videoconference to EU leaders in Brussels, Sall acknowledged that Russia's blockade of Odessa had harmed Ukrainian food exports, and he backed UN-led efforts to free the port.

"I would also like to tell you that our countries are very concerned about the collateral effects of the disruption caused by the blocking of SWIFT payment system," Sall added.

"When the SWIFT system is disrupted, it means that even if the products exist, payment becomes complicated, if not impossible.

"I would like to insist that this issue be examined as soon as possible by our competent ministers in order to find appropriate solutions," he said.

On Monday, the EU leaders agreed to add Russia's largest bank Sberbank to the growing list of lenders to be excluded from the Belgium-based SWIFT network, which facilitates inter-bank payments.