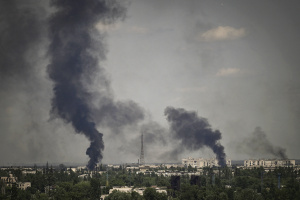 Smoke rises in the city of Severodonetsk during heavy fightings between Ukrainian and Russian troops at eastern Ukrainian region of Donbas on May 30, 2022, on the 96th day of the Russian invasion of Ukraine. EU leaders will try to overcome Hungary's rejection of a Russian oil embargo on May 30, 2022 as part of a further tightening of sanctions against Moscow, whose forces are advancing in eastern Ukraine, with fighting in the heart of the key city of Severodonetsk. (ARIS MESSINIS / AFP)

(AFP) - European Union leaders met in Brussels on Monday seeking to overcome Hungarian opposition to an embargo on Russian oil, as Moscow's forces made gains in the eastern Donbas region of Ukraine.

Ukrainian President Volodymyr Zelensky was set to address leaders at the emergency summit, expected to press the block "to kill Russian exports" as he seeks to crank up international pressure on Moscow.

In Washington, US President Joe Biden said he would not send rocket systems to Ukraine that could hit Russian territory, despite urgent requests from Kyiv for such weapons and extensive US military aid for Ukraine since the war began.

EU diplomats have drafted a watered-down agreement that would see pipeline oil exempted from the ban, in the hopes of unblocking talks on the bloc's sixth round of Russian sanctions.

Ahead of the meeting, Hungarian Prime Minister Viktor Orban told reporters the proposal was a "good solution" but warned there was "no agreement at all" as things stood.

On the ground, Russian forces pressed their offensive in Donbas.

The situation in Severodonetsk, just across the Donets river from its sister city of Lysychansk, was "very difficult", the local Lugansk regional governor Sergiy Gaiday said in a statement on social media.

"The Russians are advancing into the middle of Severodonetsk", while the fighting continued, Gaiday said.

"We are not going to send to Ukraine rocket systems that can strike into Russia," Biden told reporters in Washington.

Ukraine has received extensive US military aid since with legislators approving another $40 billion (37.1 billion euros) assistance package earlier in May.

France's new foreign minister Catherine Colonna said on a visit to Kyiv that Paris was ready to boost military aid to Ukraine to help it counter Russia's invasion.

France will "continue to reinforce arms deliveries," Colonna said at a news conference with her Ukrainian counterpart Dmytro Kuleba.

The arms would arrive "in the coming weeks", she said.

The highest-ranking French official to visit the capital since Russia invaded Ukraine on February 24, Colonna also visited the town of Bucha, where Russian troops have been accused of committing war crimes against the civilian population.

"This should never have happened. It must never happen again," Colonna told reporters after visiting an Orthodox church in the town.

The foreign minister's visit came as a French journalist was killed while working in Ukraine.

Frederic Leclerc-Imhoff was "on board a humanitarian bus" when "he was mortally wounded," French president Emmanuel Macron wrote on Twitter on Monday.

Speaking alongside Colonna, Kuleba said he hoped "divisions will be overcome" at the EU leaders meeting.

A sixth wave of EU measures against Moscow was put on the table weeks ago, but has been rejected by Orban and resisted by neighbouring countries also reliant on pipelined Russia oil.

Macron cautiously told reporters that a long-sought-after deal was "getting closer", but others doubted that the Hungarian leader was ready to sign on at this stage.

"I don't think we'll reach an agreement today," Estonian Prime Minister Kaja Kallas said at a political meeting ahead of the summit

Hungary has asked for at least four years and 800 million euros ($860 million) in EU funds to adapt its refineries and increase pipeline capacity for alternative suppliers, like Croatia.

But under the compromise proposal the Druzhba pipeline could be excluded from a sanctions package "for the time being", an EU official told AFP.

Since failing to capture Kyiv in the war's early stages, Russia's army has narrowed its focus, hammering Donbas cities with relentless artillery and missile barrages as it seeks to consolidate its control.

But Ukrainian forces pushed back over the weekend in the southern region of Kherson, the country's military leadership said.

The Ukrainian general staff claimed the move had put their adversary into "unfavourable positions" around the villages of Andriyivka, Lozovo and Bilohorka and forced Moscow to send reserves to the area.

At the same time, two people were injured following an explosion in the Moscow-controlled city of Melitopol in south-eastern Ukraine, with local pro-Kremlin authorities blaming Kyiv.

Russia-installed authorities said the city had been targeted by a "terrorist attack".

"The Ukrainian government continues its war on the civilian population and the infrastructure of cities," a statement said.

At least five people died following strikes on civilian infrastructure in Ukraine's separatist-controlled city of Donetsk, according to Russian investigators.

Authorities in the DNR said on Telegram that two apartment blocks and three schools were hit in the attack, accusing Kyiv of using artillery and rockets with cluster munitions.