Russian forces close in on key Ukraine city in east 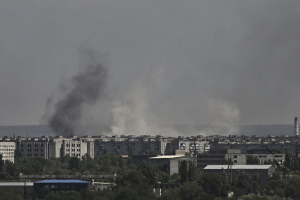 Smoke and dirt rise from the city of Severodonetsk, during shelling in the eastern Ukrainian region of Donbas, on May 26, 2022, amid Russia's military invasion launched on Ukraine. Ukraine said may 26 the war in the east of the country had hit its fiercest level yet as it urged Western allies to match words with support against invading Russian forces. Moscow's troops are pushing into the industrial Donbas region after failing to take the capital Kyiv, closing in on several urban centres including the strategically located Severodonetsk and Lysychansk. (ARIS MESSINIS / AFP)

(AFP) - Russian troops were moving in on the strategic city of Severodonetsk Friday in a relentless offensive to control Ukraine's eastern Donbas region, bombing residential areas and claiming the capture of a key town.

At least nine people were killed a day earlier in shelling of Kharkiv, Ukraine's second-largest city, raising fears that Russia had not lost interest in the northeastern hub even after Ukraine managed to take back control.

Around 10 people were also killed in Russian strikes on a military facility in the central Ukrainian city of Dnipro, well away from the frontline of the offensive, the regional head of the national guard said.

Three months after Russia launched its invasion on February 24, leaving thousands dead on both sides and forcing 6.6 million Ukrainians out of the country, Moscow is focusing on the east of Ukraine after failing in its initial ambition to capture Kyiv.

Russian forces were closing in on Severodonetsk and also Lysychansk in the pro-separatist Lugansk province, which stand on the crucial route to Ukraine's eastern administrative centre in Kramatorsk.

"Russia is pressuring the Severodonetsk pocket although Ukraine retains control of multiple defended sectors, denying Russia full control of the Donbas," the British defence ministry said in its latest briefing.

That was denied by senior city official Oleksandr Stryuk, though he acknowledged that the situation was "very difficult" with incessant bombing.

Pro-Russian separatists said they had captured the town of Lyman that lies between Severodonetsk and Kramatorsk, on the road leading to the key cities that are still under Kyiv's control.

Lugansk's regional governor Sergiy Gaiday said in a video on Telegram that at least five civilians had been killed in his region in the past 24 hours alone.

"People are willing to risk everything to get food and water," said Oleksandr Kozyr, the head of the main aid distribution centre in Lysychansk.

"They are so psychologically depressed that they are no longer scared. All they care about is finding food," he said.

Oleg Sinegubov, governor of the Kharkiv region, said that nine civilians had been killed in the Russian shelling on Thursday.

A five-month-old child and her father were among the dead, while her mother was gravely wounded, he said on social media channels.

The city of Kharkiv's mayor, Igor Terekhov, said its metro system, which resumed work this week after being used mainly as a shelter since the Russian invasion, would continue operating while still providing a safe space for residents.

"We will not stop the metro, but we will allocate special sectors where you can stay and shelter from bombing," Terekhov said.

Observers believe that Russia's gains in over three months of war have been far more paltry than President Vladimir Putin hoped, though Moscow has gained control over a handful of cities in southern Ukraine, such as Kherson and Mariupol.

The Kremlin is now seeking to tighten its grip over the parts of Ukraine it occupies, including fast-tracking citizenship for residents of areas under Russian control.

Russian authorities in Mariupol, which was taken over this month after a devastating siege that left thousands dead and reduced the city to rubble, cancelled school holidays to prepare students to switch to a Russian curriculum, according to Kyiv.

There has been speculation that Russia could seek to annex areas of eastern and southern Ukraine it now controls, possibly in referendums during Russian regional elections held nationwide in September.

Ukraine's President Volodymyr Zelensky will speak with EU leaders at an emergency summit Monday as they try to agree on oil sanctions against Russia, which are being held up by Hungary, whose Prime Minister Viktor Orban has close relations with Putin.

Zelensky said in a virtual address to a think tank in Indonesia, which is hosting this year's G20 summit, that "rather than continue trading with (Russia), we need to act until they stop their policy of aggression".

There have also been tensions between Kyiv and some Western nations, in particular Germany, over a perceived reluctance to supply more weapons to Ukraine lest the conflict intensify further.

Ukraine has also bristled at suggestions that Putin should be offered an "off-ramp" to save face in a compromise deal that would see Kyiv concede some territory.

"Some partners avoid giving the necessary weapons because of fear of the escalation. Escalation, really?" Zelensky's adviser Mykhailo Podolyak wrote on Twitter, saying it was "time to respond" by giving Kyiv multiple launch rocket systems (MLRS).

British Prime Minister Boris Johnson said he feared that Putin was "continuing to chew through ground in Donbas."

"And therefore, it is absolutely vital that we continue to support the Ukrainians militarily," he said.

Concerns are also growing over global food shortages due to the conflict, exacerbating problems for the world's poor at a time of rising energy prices.

Russia and Ukraine alone produce 30 percent of the global wheat supply, with grain-carrying vessels unable to leave ports in Ukraine.

But Putin rejected claims that Russia was blocking Ukraine's grain exports as "groundless" in a telephone call Friday with Austrian Chancellor Karl Nehammer, the Kremlin said.

On Thursday, Putin told Italian Prime Minister Mario Draghi that Moscow was ready to make a "significant contribution" to averting a looming food crisis if the West lifts sanctions imposed since the Ukraine invasion.