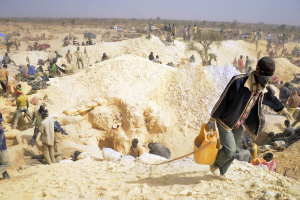 Miners work at a clandestine gold mine on February 20, 2014 in the village of Nobsin, 10km from the city of Mogtedo in the Ganzourgou region, where the gold fever doesnt spare children who risk their lives trying to find a way to survive. (AFP PHOTO / AHMED OUOBA)

(AFP) - Two people died and another was injured in clashes between security forces and protesting gold miners in western Burkina Faso, the government's spokesman said on Wednesday.

Lionel Bilgo said the incident broke out in Hounde on Tuesday when security forces tried to "limit or prevent" a demonstration demanding the liberation of 12 miners arrested after a gold mine was ransacked last week.

"Unfortunately, we count two victims: one during a crush and another from bullet shots," Bilgo said, adding that another person was injured with a bullet wound.

An investigation was underway to "determine the origin of these bullets and attribute responsibility", he said.

The ransacking of the Hounde gold mine on May 17 by protesters opposed to the expulsion of local miners injured seven people and caused massive damage to equipment and vehicles.

Bilgo called for calm and said a taskforce had been set up to "find a solution".

Informal mining employs around 1.5 million people and generates a further 10 tonnes of gold every year, according to the mining ministry.

In April, Russian gold company Nordgold said it had halted activity at its main private mine in northern Burkina Faso for "security reasons".

The region has been plagued by a jihadist insurgency led by rebels affiliated with Al-Qaeda and the Islamic State group, killing thousands and displacing almost two million since 2015.