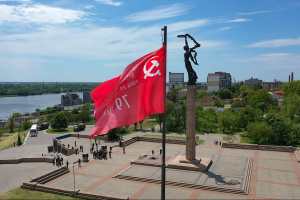 A replica of the Soviet Banner of Victory flies by a WWII memorial in the city of Kherson on May 20, 2022, amid the ongoing Russian military action in Ukraine. Authorities in the Moscow-controlled Ukrainian region of Kherson announced on May 23 the introduction of the ruble as an official currency alongside the Ukrainian hryvnia. The region's capital Kherson was the first major city to fall to Russian forces after the start of Moscow's military operation in Ukraine on February 24. (Andrey BORODULIN / AFP)

(AFP) - A Russian diplomat in Geneva has left his job in protest at the Kremlin's war in Ukraine, telling diplomatic colleagues: "Never have I been so ashamed of my country."

Boris Bondarev, a counsellor at Moscow's mission to the United Nations in Geneva, wrote in a letter that he was leaving after 20 years in the diplomatic service, decrying Russia's invasion of its Western neighbour.

In the letter, circulated to a number of diplomatic missions in Geneva and seen by AFP, he condemned "the aggressive war unleashed by Putin against Ukraine and in fact against the entire Western world".

He said the letter "Z" -- which has been daubed on Russian tanks and vehicles in Ukraine and has come to symbolise support for the war -- was "crossing out all hopes and prospects for a prosperous free society in our country".

Bondarev maintained that "those who conceived this war want only one thing -- to remain in power forever, live in pompous tasteless palaces, sail on yachts comparable in tonnage and cost to the entire Russian navy, enjoying unlimited power and complete impunity".

"Russia no longer has allies and there is no one to blame but its reckless and ill-conceived policy," he regretted.

He lamented that Russia's foreign service had deteriorated over the 20 years he had worked there, singling out Foreign Minister Sergei Lavrov as a "good illustration of the degradation of this system".

"Today, the ministry of foreign affairs is not about diplomacy. It is all about warmongering, lies and hatred," he said.

"I simply cannot any longer share in this bloody, witless and absolutely needless ignominy."

Bondarev's resignation -- which several diplomatic sources said was not the first by a Russian diplomat since the invasion three months ago but definitely the most outspoken -- drew cheers of admiration.

Hillel Neuer, who heads Geneva-based rights group UN Watch and who first tweeted about the letter, urged "all other Russian diplomats at the United Nations -- and worldwide -- to follow his moral example and resign".