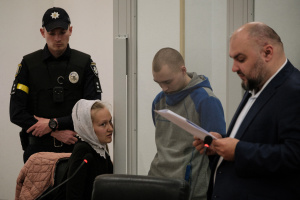 Russian Sergeant Vadim Shishimarin (2ndR) stands and listens translator's words in the defendant's box during his trial on charges of war crimes for having killed a civilian at the Court of Appeal in Kyiv, on May 20, 2022. The lawyer for the first Russian soldier on trial in Ukraine said in closing arguments Friday that his client was "not guilty" of premeditated murder and war crimes. The Russian serviceman, 21-year-old Vadim Shishimarin has admitted in court in the capital Kyiv to killing a 62-year-old civilian in the early stages of Moscow's invasion of Ukraine. (Yasuyoshi CHIBA / AFP)

(AFP) - Russia said Thursday that 1,730 Ukrainian soldiers had surrendered this week at Mariupol's Azovstal steel plant, after a desperate battle that has become emblematic of the nearly three-month-old war.

The number included 80 wounded who were taken to a hospital in Russia-controlled territory in eastern Ukraine, Moscow said.

The Russian defence ministry released a video appearing to show exhausted Ukrainian soldiers trudging out of the sprawling steelworks, after a weeks-long siege forced the defenders and civilians to huddle in tunnels, enduring dire shortages of food, water and medicine.

Russian troops patted down those surrendering and inspected their bags as they left, signalling the effective end of what Ukraine's government had called a "heroic" resistance.

The International Committee of the Red Cross said it had registered "hundreds of Ukrainian prisoners of war" from the plant in Mariupol, a port city obliterated by Russian shelling.

Ukraine is hoping to exchange the Azovstal soldiers for Russian prisoners. But pro-Kremlin authorities in Ukraine's eastern Donetsk region said some of them could be put on trial.

The United States warned Thursday it would be watching the situation closely.

"Our expectation is... that all prisoners of war will be treated in accordance with the Geneva Convention and the law of war," Pentagon spokesman John Kirby said.

Ukraine has already begun its own process of trying captured troops for crimes they are alleged to have committed, with prosecutors detailing 12,595 counts -- including the horrific bombing of a maternity ward in Mariupol.

The first Russian soldier to go on trial in Ukraine begged for forgiveness Thursday.

"I know that you will not be able to forgive me, but nevertheless I ask you for forgiveness," the 21-year-old sergeant told Shelipov's widow in the cramped courtroom in Kyiv.

The West's support for Kyiv stiffened further Thursday when a $40 billion aid package was approved by an unusually united US Congress.

It includes $6 billion earmarked for Ukraine to boost its armoured vehicle inventory and air defence system.

Germany also said it would contribute one billion euros to shore up Ukrainian government coffers as G7 finance ministers met to coordinate action.

Ukraine's President Volodymyr Zelensky, who has been lauded in Europe and the United States for his leadership in the face of Russian aggression, welcomed the package, but insisted it would not only benefit his country.

"For our partners, it's not just expenses or a gift, it's their contribution to their own safety," he said.

"The defence of Ukraine also represents their own defence against new wars or crises that Russia can provoke."

Russia's actions are already redrawing the security map of Europe.

US President Joe Biden welcomed the leaders of Finland and Sweden after the Nordic nations decided to abandon decades of military non-alignment and join NATO.

"They meet every NATO requirement and then some," Biden told reporters.

Admission to the bloc must be approved unanimously by current members, and Turkey is a fly in the ointment, with President Recep Tayyip Erdogan calling Sweden a "complete terror haven".

Turkey has rebuked the two countries for what it describes as leniency towards the Kurdistan Workers' Party (PKK) and other armed Kurdish groups.

The PKK has waged an insurgency against the Turkish state since 1984 and is blacklisted as a "terrorist organisation" by Turkey and Western allies such as the European Union -- which includes Finland and Sweden.

NATO Secretary General Jens Stoltenberg said the alliance was "addressing the concerns that Turkey has expressed".

US Secretary of State Antony Blinken echoed that remark, saying: "If concerns are raised by any members of the alliance, they'll be addressed."

"I'm very confident that as this process moves forward, there will be a strong consensus for bringing both countries under the Alliance," he added.

In Finland, where previously lukewarm support for NATO membership has exploded since Russia's invasion of Ukraine, one brewery produced a special NATO beer.

It tastes of "security, with a hint of freedom", brewer Petteri Vanttinen said.

The global ramifications of Russia's invasion continued to be felt, with UN Secretary-General Antonio Guterres warning it could spark enduring food insecurity in some parts of the world.

"Malnutrition, mass hunger and famine" could follow "in a crisis that could last for years", Guterres warned, urging Russia to release grain exports from occupied Ukraine.

Russia and Ukraine produce 30 percent of the world's wheat supply, and the war has already sent food prices surging around the world.

"Being unable to access nearly one-third of our croplands, the systematic destruction by Russian forces of Ukrainian agriculture and transport infrastructure, the blockade of our seaports -- these are part of Russia's strategy of exerting pressure on the international community," he said.

Despite their last-ditch resistance in places such as Mariupol, and the successful defence of Kyiv, Ukrainian forces are retreating in the east.

The losses often come after weeks of battles over urban hubs that are pulverised by artillery fire by the time the Russians surround them.

Ukraine's defence ministry said Thursday that Russia was intensifying its attacks in the eastern Donbas region and preventing civilians from fleeing to Ukrainian-controlled territory.

In Severodonetsk, 12 people were killed and another 40 wounded when Russian forces shelled the eastern city, the regional governor said.

In the Kharkiv region, one man was killed and five others injured Thursday, while five civilians were killed and six others wounded in Donetsk.

Severodonetsk resident Nella Kashkina sat in her basement next to an oil lamp and prayed.