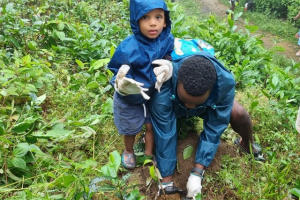 (Seychelles News Agency) - A French father and his son decided to plant endemic trees along one of Seychelles' nature trails despite drizzling rain and fog at the Salazi, Sans Soucis trail in the Morne Seychellois national park, as a way to offset their carbon footprint created during their round trip from Paris to the island nation.

Eloim Demikouiza and his 2-year-old son Aaron, together with some staff from the Seychelles Parks and Gardens Authority (SPGA), and representatives from the tourism and environment ministries, planted 35 Heritiera littoralis trees, locally known as 'Bois de Table', on Tuesday, at an area of the national park known as at the Green Footprint Seychelles site - a carbon offsetting project initiated by the British High Commission.

Demikouiza explained that during his first visit with his wife in 2018, he saw some tourists leaving their empty plastic bottles behind which was not being mindful of the environment. Having become a father, he found the need to teach his son to respect nature.

"I am a father now and I said to myself that now is the time to start making him aware of how important the environment is. I hope that later on in life he will look at the environment differently," he said.

Demikouiza got in touch with the local environment ministry about a month ago through Seychelles' embassy in Paris.

The director-general for public education and community outreach, Jeannette Larue, told the press that tree planting was a better-suited activity for the family as they will be able to see the progress on their next trip to Seychelles. The two French citizens will be able to identify the trees they planted as each is labeled with a tag.

"His family was the first of tourists to contact the Ministry of Environment to show their interest. They insisted that the activity be included in their itinerary. He did not ask us for tree planting specifically, but wanted to do something that would contribute towards the environment," said Larue.

She explained that the ministry did not want to organise a beach clean-up, as the result might not be long lasting, and as such, they might not be able to enjoy their efforts the next time they come to the island nation.

Larue added that such activities can be encouraged as part of a carbon offsetting programme that countries around the world are being encouraged to practice to compensate for the carbon emission and greenhouse gases visitors produce when traveling.

According to the website Flight Free, a round-trip between Paris and Seychelles emits 2.8 metric tons of carbon dioxide per passenger.

Calling out to fellow visitors to the 115-island archipelago, Demikouiza said that "as tourists, whenever you come to Seychelles or go to other countries, leave it as beautiful as you found it. If you can do something for the country, that is even better. Don't litter and be good towards nature as we are nothing compared to her and without her, we won't be alive."