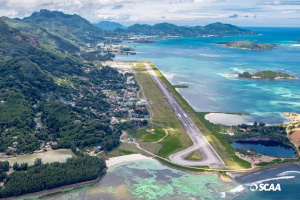 SCAA said in a press statement most sightings are within the flight path leading to the airport. (Seychelles Civil Aviation Authority)

An alarming increase in the number of activities using drones has been sighted within the flight path of the international airport at Pointe Larue during weekends and public holidays, the Seychelles Civil Aviation Authority (SCAA) said on Monday.

SCAA said in a press statement most sightings are within the flight path leading to the airport, around Eden Island, Cerf Island and other harbour areas.

"The reckless or negligent use of drones in restricted or controlled airspace around Mahe, Praslin and La Digue, without the necessary approval of the SCAA, is considered a serious breach of aviation safety and security which can endanger an aircraft or helicopter and its occupants," said the authority.

The use of drones or unmanned aircraft in Seychelles, an archipelago in the western Indian Ocean, is regulated under Regulations 25 of the Civil Aviation Safety Regulations, 2017 (Endangering safety of an aircraft).

The regulations state that "a person shall not recklessly or negligently act in a manner likely to cause danger to an aircraft or any person in an aircraft."

SCAA's general manager, David Labrosse, said that this regulation is enforceable under the laws of Seychelles.

"We are currently working closely with the police to ensure that there is enforcement to the law, as safety remains our priority, and the onus is on us to protect the public travelling by air so that they arrive safely to their destinations," he added.

SCAA has appealed to drone users to get acquainted with the guidelines, as a means of preventing the misuse of these devices, whilst ensuring a high level of safety and security for airlines and travellers.

While drones are commonly used in the past in Seychelles for commercial photography and cinematography to take aerial views of the island nation, they are now also being used for specific surveillance purposes.

The Seychelles Defence Forces (SDF) are using drones to carry out real-time aerial surveillance of target vessels and search and rescue operations and the Seychelles Fishing Authority (SFA) is doing the same to support fisheries surveillance efforts.