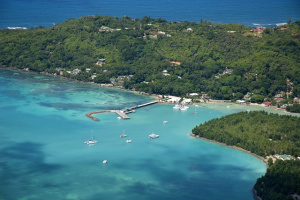 The project, which will be implemented at Baie St Anne, expects to have the capacity to berth around 50 vessels. (Gerard Larose)

Seychelles' Praslin Island will soon have more berthing space for hire crafts, bringing more business to the island as the government gives the go-ahead for the construction of a marina.

The project, which will be implemented at Baie St Anne, expects to have the capacity to berth around 50 vessels. As part of a larger plan for a new town centre for Baie St Anne, the marina will be located at the passenger terminal on the plot of land commonly known as Electricity island.

Transport minister Antony Derjacques said recently that the government wishes to develop a 5000-square-metres plot of land into a marina as there is a lack of such a facility on the island. It will feature pontoons along a 200-metre causeway as well as water, refuelling, waste and sewage management facilities among others relating to a marina.

On the main island of Mahe, there are numerous marinas that together can accommodate between 500 to 600 vessels. Issues arise when vessel owners want to spend time on Praslin, the second most populated island, and other neighbouring islands.

"Praslin currently has a small area at the present passenger terminal which can take between 30 to 40 vessels. We have noticed that when vessels go to Praslin and La Digue, they do not have any place to berth and enjoy the islands to the fullest. They have to either remain at sea or return to Mahe at the end of the day," said Derjacques.

The Seychelles Port Authority's chief executive, Ronny Brutus, said that this comes at a time when Seychelles is seeing an increasing pressure in the maritime sector as more leisure crafts are coming to the island nation.

"The port authority will lead this project to ensure that its implementation is done in its totality, respecting all norms established, so that the marina can function and deliver the needed services," said Brutus.

The government foresees that with a larger marina on Praslin and other facilities built in its vicinity, visitors to the island will be able to enjoy more services allowing businesses to benefit even further.

With the project being a public-private partnership, the government will soon launch a call for expressions of interest and the project's particulars. The submitted plans will be reviewed and evaluated by a committee to see which better fits the vision of the government for the area.

"We want the project to become a success not only for the operators but also for the population of Praslin and the leisure vessels that will be berthing. This is one of the marinas that we envision building on Praslin," said Derjacques.