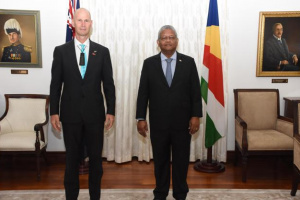 Michael Upton was accreditated as the High Commissioner of New Zealand to Seychelles on Tuesday. (Seychelles Nation)

Border security and the fight against the flow of illegal substances were at the forefront of discussions, said the newly accredited High Commissioner for New Zealand on Tuesday.

Talking to the press following his accreditation at State House, Victoria, the High Commissioner, Michael Upton, said that the two topics were greatly stressed by president Wavel Ramkalawan.

"We are very keen to look at areas where experience and knowledge can be shared, particularly in the area of border control. This is an area of concern where we will explore what is possible, particularly to look at what can be done to address flows of illicit substances," said Upton.

Discussions also centred around the topic of COVID-19 and how it has affected the economies of the two, where Upton outlined that trade between the two countries, especially supply chains, faced difficulties during the pandemic.

Seychelles and New Zealand have shared diplomatic ties since 1992 and Upton said that the two countries have a lot in common, especially when it comes to climate change as both countries are oceanic island nations.

Discussions also focused on multilateral concerns, such as the upcoming climate change conference -- COP27 -- and the ongoing Russia-Ukraine war.

"We talked about the importance of climate change with the COP27 happening in Egypt later this year. It is very important that the world moves forward toward implementation. New Zealand has made a contribution towards financing over $1.3 billion from 2022 to 2025 with 50 percent of those finances being targeted toward adaptation," said Upton.

The upcoming Commonwealth Heads of Governments meeting in Kigali in June was also discussed.

Upton told the press that there is a range of important topics to be resolved at that meeting and New Zealand is keen to see the Commonwealth comes together.

"New Zealand can contribute in very targeted ways, particularly in the areas of human rights, democracy and the rule of law," said Upton.

He expressed his country's concerns surrounding Russia's invasion of Ukraine and said that "New Zealand stands with the international community and we have been very grateful for Seychelles support of Ukraine in that fora."

The high commissioner said that President Ramkalawan affirmed Seychelles' non-aligned position and its commitment to speaking out on issues of concern.

During his one week working visit in Seychelles, a group of 115 islands in the western Indian Ocean, Upton, who is based in Addis Ababa, Ethiopia, will also be calling on several ministers.