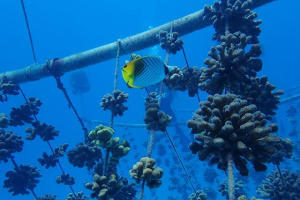 Nature Seychelles started an underwater coral gardening project in 2010 following the mass coral bleaching as a result of the El Niño phenomenon of 1998. (Nature Seychelles)

Nature Seychelles, a nonprofit organisation, is planning to set up a land-based aquaculture coral farm on the island of Praslin to produce more heat-resilient corals, which are better engineered to adapt to continuously rising ocean temperatures.

The organisation's chief executive, Nirmal Shah, told SNA that such a project will be more advantageous than an ocean-based nursery or farm.

"By growing corals in an aquaculture facility, we will be able to produce more corals and faster. We can also produce corals that we have experimented with. We want to train the corals to become more resilient to heat as this is the problem corals face at the moment," said Shah.

Corals all over the world are increasingly dying due to the continuous rise of sea temperatures as a result of climate change.

Shah explained that it is more urgent for Seychelles matters as waters of the western Indian Ocean are warming up at a faster rate, causing corals to bleach faster.

When corals bleach, they expel their symbiotic partners, types of photosynthetic algae, causing the corals to be deprived of their nutrients and, as such, die off.

Shah said that coral reefs are very important for Seychelles and there needs to be a massive national effort to bring in scientists and practitioners to do very large work.

"We are trying in our small way to set this platform on Praslin. We need to assist the corals to evolve and the only way to do that is by intervening directly into the genetics of the corals," said Shah.

"The idea is to bring top scientists from all over the world, particularly from Australia and from the U.S., where they are doing some of these cutting-edge researches. We want to bring them here to see if we can actually tinker with some of these corals to be able to make super corals in the future because otherwise, the coral reefs are going to disappear," he continued.

Shah said the project will also provide Seychelles with the opportunity to try a new coral growing technique called micro-fragmentation. Instead of cutting pieces of corals and growing them on ropes in the sea, very tiny fragments of corals can be obtained and from which thousands of corals can be produced.

"We will also be able to grow coral that we couldn't in underwater nurseries; they were not conducive for such. This includes massive corals such as the big brain coral. We tried to grow them on nets but they do not grow very well. With this technique, we can grow them as well. It will increase the diversity of our designer reef," said Shah.

Corals produced in the land-based farm will later be transferred to Cousin Island's special reserve's coral reef, which is being monitored constantly, ensuring higher survival rates of corals.

The project is part of an Adaptation Fund regional coral reef restoration project being implemented by the UNDP, the government of Mauritius and Seychelles. Part of the fund being provided to Seychelles will be used in the construction of the land-based facility.

Shah said that public consultations have already been held with inhabitants of Praslin, the second most populated island of Seychelles, a group of 115 islands in the western Indian Ocean.

The organisation still needs to submit relevant documents to the planning and fisheries authorities before the building of the facility can start.