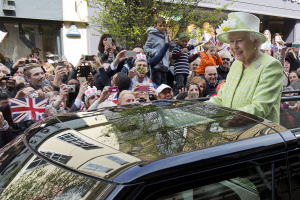 (FILES) In this file photo taken on April 21, 2016 Britain's Queen Elizabeth II greets wellwishers during a 'walkabout' on her 90th birthday in Windsor, west of London. Gun salutes will ring out Thursday to mark Queen Elizabeth II's 96th birthday, although the monarch herself was expected to mark the occasion with little fanfare. (JUSTIN TALLIS / AFP)

The Band of the Coldstream Guards, in red tunics and bearskin hats, played the tribute to crowds of onlookers outside her Windsor Castle home west of London.

Ceremonial gun salutes resounded across the country, including at the Tower of London.

But the queen -- the oldest and longest-serving head of state in the world -- marked the occasion with little fanfare, retreating to her Sandringham country estate in eastern England for a short break.

No official engagements have been planned, although royal officials released a photograph of the horse-loving head of state with two of her fell ponies.

Her grandson Prince William and his wife Kate called her "an inspiration to so many across the UK, the Commonwealth and the world".

Royal tradition since the 18th century has also seen the monarch have a second, official birthday, typically celebrated in warmer weather in June.

This year's official birthday coincides with four days of public events from June 2 to 5 to mark her record-breaking 70th year on the throne.

US toy manufacturer Mattel released a new Barbie doll of the queen to commemorate the Platinum Jubilee.

The Sandringham trip is being seen as a "positive step", given her recent health problems, British media reported.

Since an unscheduled overnight stay in hospital last October, she has cut down massively on public appearances on doctor's orders.

A back complaint and difficulties standing and walking have seen her cancel a number of engagements, including recent church events to mark Easter.

A bout of Covid-19 in February left her "very tired and exhausted", she admitted earlier this month.

But William's brother Prince Harry told US broadcaster NBC in an interview aired on Wednesday that she was "on great form" when he saw her last week.

The queen was last seen in public at Westminster Abbey in central London on March 29 at a memorial service for her late husband Prince Philip, who died last year aged 99.

The queen's enforced retreat from public life in her Platinum Jubilee year has increased attention on the succession and future of the monarchy.

Her eldest son and heir, Prince Charles, has assumed more of his mother's responsibilities in preparation to take over the throne.

His popularity has increased in recent years, according to an Ipsos poll of more than 2,000 adults in Britain in March.

But his 43 percent approval rating is still well behind that of his mother (69 percent), his eldest son Prince William (64 percent) and his daughter-in-law Kate Middleton (60 percent).

Some 42 percent of those surveyed also said they believed Charles, 73, should step aside for William, who turns 40 in June.

The queen's health and the succession apart, the royals have rarely been out of the headlines due to a succession of scandals.

Last month there was controversy after the queen's disgraced second son Prince Andrew supported her at Prince Philip's memorial service.

In February, he settled a US civil claim for sexual assault that had earlier seen him stripped of his honorary royal military titles and charitable roles.

The palace is said to be bracing for fresh revelations about royal life from Harry, who is due to publish his memoirs later this year.

From there, the couple accused the royal family of racism, while Harry claimed his father Charles and brother William were "trapped" within the system of the British monarchy.

The future of the royal family's global reach is also far from assured.

The queen is head of state of Britain and 14 other Commonwealth countries around the world.

But Barbados became a republic last year and a number of other Caribbean countries, including Jamaica, have since indicated they want to follow suit.