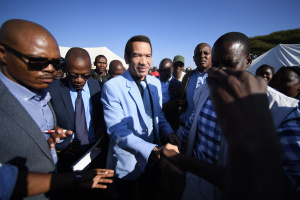 Botswana former president Ian Khama Sereste (C) shakes hands with wellwishers as he arrives to announce his departure from the Botswana Democratic Part (BDP) which has ruled since independence more than half a century ago, on May 25, 2019, during a meeting in his home village in Serowe. It is the first time in Botswana that an ex-president has abandoned the ruling Botswana Democratic Party (BDP) in the history of a 57-year-old organisation which has ruled Botswana uninterrupted since independence in 1966. (Monirul BHUIYAN / AFP)

Khama, who governed one of Africa's most stable democracies for 10 years until 2018, has been summoned to appear before a court in Gaborone on Thursday. It is unclear if he will show up as ordered.

The son of the country's founding leader has been living in self-imposed exile in neighbouring South Africa since November.

Khama, 69, fell out with his handpicked successor Mokgweetsi Masisi whom he has accused of authoritarianism.

Court papers said Khama is accused alongside four others, including a former intelligence chief and a suspended police boss.

The five face a total of 38 charges ranging from receiving stolen property and unlawful possession of firearms to registering firearms under false pretences.

In the runup to the 2019 general elections, Khama dramatically resigned from the Botswana Democratic Party, the party his father Seretse Khama founded and which has held power since 1966.