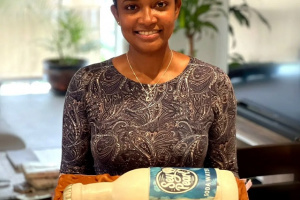 When she was out with friends, she would stick to having water. (Madiha Philo)

(Seychelles News Agency) - Living a life consuming little to no alcohol is one that many people seek for one reason or another. Many start the year making a resolution that they will start their sobriety journey, but how many actually stick to that commitment?

SNA met with Madiha Philo, a 30-year-old Seychellois former journalist and TV presenter who now works in PR, who has not drunk alcohol for a year.

Philo had the life of a social butterfly and on the weekends she and her friends went out and drinking alcohol was almost always on the table.

"You would usually see me in bars, especially Gran Kaz, which was my go-to place every Friday. I really enjoyed drinking gin and rum," she said.

Philo said that going off alcohol "was just something that happened."

She outlined that last year in January when Seychelles was in a partial lockdown and most people were working from home, she found herself drinking on a daily basis.

"With the COVID restrictions in place, no entertainment was allowed but I noticed that I was drinking in excess even if I was not going out. By excess, I mean that I was at least having a glass of alcohol every night, not necessarily a bottle," Madiha explained.

She added that the alcohol she usually had required a mixer and her preferred mixers were soft drinks which contain a lot of sugar and calories.

Once the restrictions were lifted Madiha returned to the gym as she is a person who loves to exercise. She shared with SNA that during the restrictions, she had put on weight.

"As soon as the gym reopened, I decided to put my focus more on exercise and embarked on an exercise programme, where the nutrition part was really strict. Alcohol was definitely not on the list of things I could consume. Coupled with the fact that we were in Lent, I wasn't drinking, as each year, I observe a 'dry March'," she said.

Two months alcohol-free turned to three and before she knew it, Philo's birthday month, May, came. Turning 30 meant that it was to be a special birthday.

"You would have thought that I would have done a big celebration, but I was not in that mindset. My mindset was to focus on living a healthier lifestyle, focusing on my career among other things, rather than socialising, partying, and consuming alcohol," said Philo.

Spending more time at home and less time socialising made it easier to stay focused on the journey to a healthier life, on which she stayed the course.

When restrictions were relaxed, it became much more difficult for her friends to accept that Philo was not drinking alcohol. Despite the fact that her friends and family supported her journey, they would try to tempt her into having a drink, a temptation she managed to resist.

"I thought it would have been something difficult but it turns out that once you have placed your mind on getting something done, no one will be able to pressure you into doing otherwise. I actually found it really easy to say no," she shared.

Philo explained that each time she would look at a bottle of alcohol or soft drink, all she saw were empty calories and tonnes of sugar, and that was a total turn-off for her. When she was out with friends, she would stick to having water. Sparkling water was her go-to when she felt like being fancier.

"When I got to the one-year mark, I felt extremely proud. I still haven't had a sip of alcohol since February 1, 2021. People might see my photos where I am toasting with a glass, but it is only a mocktail. I would have thought things would be more difficult, considering my past lifestyle," she said.

"This year I am even more focused because I see the benefits that it brings. Having said that, if I will want a drink in the future, I will, but first and foremost I must really want to have that drink," she continued.

The benefits of not drinking alcohol

Philo told SNA that aside from the weight loss, which was a combination of healthy eating and exercising, not drinking alcohol brought other benefits. Being a person who suffers from severe migraines, Philo noticed that because she was not drinking alcohol, her migraine episodes and their frequencies significantly reduced.

She also shared that she has been making a saving out of her entertainment budget. This saving now goes toward her new healthier lifestyle.

The only person who can make a difference in your life is you, Philo shared, and "you should surround yourself with people who will provide you with the necessary support."