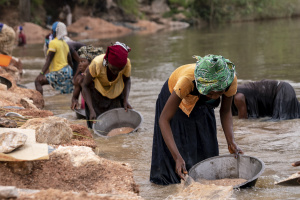 Artisanal miners collect gravel from the Lukushi river searching for cassiterite on February 17, 2022 in Manono. The Democratic Republic of Congo is rich with Lithium, an essential mineral for electric car batteries, which nests in the remains of the former mining town of the city of Manono in the south-east of the country in the province of Tanganyika. To get out of poverty, the inhabitants of Manono, most of whom are artisanal diggers, place their hope in the investment of the Australian company AVZ minerals which plans to invest 600 million dollars in the construction of a lithium mining. (Junior KANNAH / AFP)

(AFP) - The Democratic Republic of Congo was admitted Tuesday into the regional East African Community (EAC), a bloc with a single market allowing free trade and movement of citizens, the group said.

The EAC, based in the Tanzanian town of Arusha, now expands to seven nations, counting Burundi, Kenya, Rwanda, Tanzania, South Sudan and Uganda among its members.

"Admission of the DRC marks a momentous occasion in the region's integration history," Kenyatta told a virtual summit.

The bloc was founded in 2000 and works to encourage trade by removing customs duties between member states. It established a common market in 2010.

The country shares borders with all EAC members except Kenya and is already a member of three other regional trading blocs.

The last country to be admitted to the EAC was conflict-wracked South Sudan in March 2016.