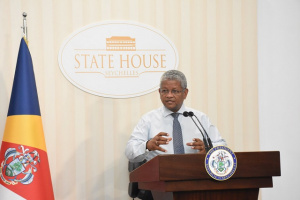 Seychelles will remain a non-aligned sovereign nation in the Russia-Ukraine conflict, the head of state said in a live presidential press conference on Thursday at State House.

SNA provides some of the highlights of his responses.

Seychelles' stance on invasion of Ukraine - Impact on the island nation

One of the first questions President Ramkalawan answered during the press meeting was Seychelles' take on the invasion of Ukraine and the consequences it will bring about on the economy of the island nation.

Ramkalawan outlined that Seychelles remains a non-aligned sovereign country and will not follow the lead of individual countries when imposing sanctions.

"Should the UN establish sanctions, these are the sanctions that we will apply as a member of the UN. What is happening in Ukraine is wrong, and we are asking President Putin and President Zelensky to sit down for a discussion to find a solution to this problem," he said.

Talking about the impact it will have on the country, Ramkalawan stated that Seychelles should expect some economic effects as the prices of fuel have reached $110 a barrel and Ukraine is a world leader in wheat production and a sunflower oil producer, which would impact imports.

He stated that Russia remains the leading tourism market for Seychelles although its passport holders are not able to use their bank's Visa cards in Seychelles.

"Seychelles does not have a problem with people coming in with cash however it needs to be declared, if not it might be confiscated," said Ramkalawan.

Visa, Mastercard and American Express suspended their operations in Russia in March.

Ramkalawan outlined that with restrictions imposed due to the pandemic being lifted, world leaders are having more face-to-face discussions, in which Seychelles needs to be present to have its voice heard. He explained that it was due to his travels that Seychelles received consignments of vaccines as donations.

"We currently have seven Seychellois training in Abu Dhabi, and in several months, they will be coming back to Seychelles with dogs that have been trained. When I meet President Uhuru Kenyatta outside of Kenya we tighten our relations, and soon we are expecting President Uhuru Kenyatta will be coming to Seychelles on an official visit where we will sign different MoUs, mainly to do with training. We will help Kenya with their fisheries sector," said Ramkalawan.

He also outlined that it was through his travels that Seychelles has established a good working relationship with the Ethiopian Prime Minister Abiy Ahmed in the fight against drugs. Ethiopia is one of the source countries from which drugs enter Seychelles through foreign nationals entering the country, after having swallowed drug bullets, on flights from Ethiopia.

Following the proposal coming from the Attorney General's (AG) Office to amend the Constitution of Seychelles to allow military personnel to assist the police without the need for a state of emergency, there have been many complaints coming from the public.

He outlined that most drug busts at sea have been carried out by military forces.

Addressing another question dealing with constitutional changes, he said that, contrary to rumours, he does not have the intention to change the Constitution so as to increase a presidential term from five years to seven.

Response to reports by the Human Rights Commission

Responding to journalists' questions about the submission of several reports by the Human Rights Commission to State House, Ramkalawan said that as an institution, the commission is doing a good job in doing so.

In the case of human rights abuse due to the deploring state of holding cells at the central police station, Ramkalawan said that there is a need to look at the other side of the coin. He said that the chairman and a member of the commission - a former judge and magistrate respectively - were both aware of the state of the cells even before his government came to power.

"When they were in these positions, why didn't they visit these cells? We can say that they helped to abuse the rights of people. My administration has not built a single holding cell so far," he said.

Talking about the commission's report dealing with Travizory – an online travel authorisation platform to enter Seychelles - Ramkalawan defended the benefit of using this platform to deal with health security within the system and it helps to fast-track the processing of passengers upon arrival.

"We have been able to expand Travizory to include the immigration forms, which a person can fill in even before they leave the country. Seychelles is the second country in the world, aside from the UAE, where visitors can be fast-tracked. An Emirates flight coming in with 300 passengers is cleared in around 50 minutes. We are talking about being efficient. We have been able to identify people coming in with fake GOPs," he added.

However, the commission in December expressed "the concern under review is whether the government, through a private contract, can restrict a Seychelles citizen from entering Seychelles by means of an electronic travel process that occurs outside of Seychelles," in terms of citizens' constitutional rights to enter their country.

Ramkalawan also expressed his disappointment in the fact that the Unity Stadium currently isn't meeting FIFA's standards. Due to this, home matches in qualification competitions are being held in Mauritius.

He outlined that work on the stadium should have been carried out during the downtime the COVID-19 pandemic brought to the sports sector.