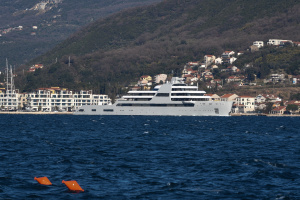 Superyacht Solaris, owned by the Russian oligarch Roman Abramovich, which is under UK sanctions, sails towards the luxury yacht marina Porto Montenegro, near Montenegrin city of Tivat, on the Adriatic coast, on March 12, 2022. The owner of the London football club "Chelsea" is among the Russian oligarchs against whom Great Britain imposed sanctions as part of the response to the Russian invasion of Ukraine. Russian oligarch Oleg Deripaska's ship "Sputnik", also under British sanctions, left the luxury marina on Friday, local media reported. (SAVO PRELEVIC / AFP)

(AFP) - Britain on Tuesday imposed an additional 35 percent tariff on a swathe of Russian imports, from vodka to steel, and banned exports of luxury goods over Moscow's invasion of Ukraine.

"We want to cause maximum harm to (Russian President Vladimir) Putin's war machine while minimising the impact on UK businesses," the Department for International Trade said.

"Russian vodka is one of the iconic products affected by the tariff increases, while the export ban will likely affect luxury vehicles, high-end fashion and works of art."

The list of goods covered by the additional tariffs include steel, wood, cereals, drinks, fur and white fish -- worth £900 million ($1.2 billion, 1.1 billion euros) a year.

"The export ban will come into force shortly and will make sure oligarchs and other members of the elite, who have grown rich under President Putin's reign and support his illegal invasion, are deprived of access to luxury goods," the DIT said.

Britain will deny Russia and its ally Belarus access to Most Favoured Nation tariffs under World Trade Organization rules.

"The UK is working with our international partners and is supporting the WTO to prevent those who fail to respect the rules-based international order from reaping its benefits," it said.

"These tariffs build on the UK's existing work to starve Russia's access to international finance, sanction Putin’s cronies and exert maximum economic pressure on his regime," said Chancellor of the Exchequer Rishi Sunak.

Since Russia invaded Ukraine almost three weeks ago, the UK has sanctioned more than 500 Russian individuals and entities.

That includes travel bans and asset freezes on 18 oligarchs with a combined worth of over £30 billion, including Chelsea Football Club owner Roman Abramovich, as well as Putin himself and his foreign minister Sergei Lavrov.

The UK has also severed ties with Russian banks, barred Russian planes and vessels and will phase out Russian oil imports by the end of the year.