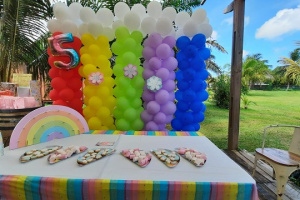 Laure said that many people are still using balloons for party decorations despite a ban in place since September 2021. (Marcia Camille)

(Seychelles News Agency) - Seychelles' environment ministry has called on the island nation to respect a ban on the use and importation of balloons and has said that punitive action will be taken against those who fail to comply.

The director for waste, enforcement and permit, Nanette Laure, told a press conference on Tuesday that "since September of last year, there should in fact not be any balloons being imported, sold and used under any circumstances."

The reminder comes after officials from the ministry noticed, through social media, that many people are still using balloons for party decorations despite a ban in place since September 2021.

"The fact that we are still seeing balloons being used at parties and other events, shows us that there are places still selling them and so we have started our checks to ensure that the shops are abiding by the laws and will take action where necessary," said Laure.

With balloons still being used despite a ban on the importation, this shows a lack of cohesion from all parties involved according to Laure, who said that "we want to work closely with the trade department to ensure that we can properly enforce the ban and eliminate any defiance."

The ban came into force on September 1, 2021. It applies to any form of balloons that are plastic, biodegradable, rubber balloons and toys. Balloons used for meteorological purposes are exempted.

"If we see people posting pictures with balloons being used, we will take action and we want people to also know that the pictures they post on social media platforms can also be used as evidence against them, should the matter be taken to court," said Sharon Gerry, the legal officer at the ministry.

The ministry has said that people in the past have not used such products responsibly, which is what has led to the ban to ensure the safety of Seychelles' environment.

Seychelles, an archipelago in the western Indian Ocean, has in the last few years imposed bans on several plastic items in a bid to further protect its environment. There is currently a ban on plastic bags, plastic utensils including cups, forks, Styrofoam takeaway boxes, and plates since 2017. This was followed by a ban on single-use plastic straws in June 2019.

The island nation has been recognised internationally as a champion for the protection of the environment and, currently, 50 percent of its terrestrial area is protected under law, while one-third of its ocean territory has been designated as marine protected areas.