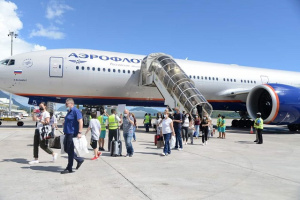 Last Saturday, Aeroflot issued a press statement saying that all international flights except those with Minsk in Belarus will be temporarily suspended as of March 8. (Tourism Seychelles)

(Seychelles News Agency) - Aeroflot, Russia's national airline, has cancelled this week's flights to Seychelles and has not provided information for the following week, said a top government official on Thursday.

The chief executive of the Seychelles Civil Aviation Authority (SCAA), Garry Albert, told SNA that Aeroflot has cancelled flights from March 9 to 13.

"We have not been informed of the status of next week's flights, which we believe they will be communicating on a weekly basis. Aeroflot operates four flights per week to Seychelles on Wednesday, Friday, Saturday and Sunday," said Albert.

As the airline will not be flying to Seychelles this week, Russian tourists currently in Seychelles are being repatriated and transferred on other airlines, namely Qatar Airways and Emirates Airline.

However, the halt in the Russian airline's flights is considered to be temporary by Russian diplomats and "Aeroflot is working on a plan to resume flights to Seychelles in the near future," the Russian Embassy in Seychelles told SNA on Thursday.

Last Saturday, Aeroflot issued a press statement saying that all international flights except those with Minsk in Belarus will be temporarily suspended as of March 8. The airline has been hit hard these past two weeks as several countries had imposed bans and sanctions on Russia since it launched military attacks in several locations in Ukraine.

Currently, many European countries have closed their airspace to Russian-owned airlines.

Albert said other airlines are maintaining their schedule and SCCA has not received any cancellations from them.

The tourism sector in Seychelles, an archipelago in the western Indian Ocean, relied on Russia as the biggest market for 2021 and the beginning of 2022.

Bernadette Willemin, director general for destination marketing, told SNA that the situation has cast a shadow on the tourism industry and Seychelles will surely feel the impact of the ongoing crisis between Russia and Ukraine sooner or later.

"We expect to feel the repercussions considering that Russia and Ukraine accounted for between 26 to 30 percent of our visitors over the past three weeks. Russia was our number one source market for 2021 and has been number one in visitor's arrival numbers since January 2022," said Willemin.

She added that "with the suspension of Aeroflot, based on the feedback from partners and our market intelligence, we can already see the effects in terms of postponement and cancellation, which at this point are still not significant or alarming."

Willemin said if the situation persists, these two countries as a source market will be a dry well.

"It is a loss for Seychelles because it will not only have an impact on tourism business such as the hotels or restaurants but for the other different sectors in the parallel economy of the country," said Willemin.

The Seychelles economy, which suffered from a downturn in travel with the COVID-19 pandemic, had been slowly recovering. The conflict between Russia and Ukraine is casting doubts on the island nation's economic stability.

"If there is one thing, we have learned these past years is that our market diversification is the right step for us as a destination. It is what has kept us standing amidst the pandemic and as we face this new hurdle, we are planning on turning to our other sources to fill up the void that the Russian market will leave behind if it gets to that stage," added Willemin.

On the positive side, the figures from the traditional markets have picked up as travel restriction conditions have improved worldwide.

"We are anticipating that this will help to keep our numbers on track while our marketing team intensifies its efforts on our other markets. Emphasis is being placed more on the markets that have direct flights, not only in Europe but for example, markets closer to home, like South Africa, Israel or even India," said Willemin.