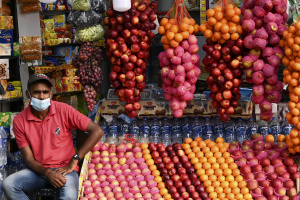 A fruit seller waits for customers along a street in Colombo on March 9, 2022. (Ishara S. KODIKARA / AFP)

(AFP) - Sri Lanka on Wednesday tightened restrictions on a wide range of imports from whisky to kitchen appliances as a foreign exchange shortage pushed the economy to the brink of collapse.

An import ban was already introduced in March 2020 on big-ticket items such as cars in an effort by the government to stop the outflow of dollars needed to pay Sri Lanka's debts.

Under the new regulations, 350 items that the government considers luxuries, including apples, grapes and oranges cannot be freely imported.

Chocolates, cheese and pasta will also not be allowed unless the government grants an exception.

The measures came two days after the government devalued the local currency by nearly 15 percent against the US dollar in a desperate bid to attract more dollars through remittances.

Sri Lanka's worst economic crisis since independence in 1948 has led to fuel and electricity rationing across the South Asian nation of 22 million, and has crippled public transport and caused long queues for food and medicines.

Essentials such as milk powder, sugar, lentils and wheat, as well as medications, are in short supply.

The coronavirus pandemic battered the island's tourism sector -- a key foreign exchange earner -- sparking fears the country may not be able to repay its $51 billion foreign debt.

Official data shows Sri Lanka needs nearly $7 billion to service its foreign debt this year, but the country's foreign currency reserves at the end of February were only $2.02 billion -- enough to finance less than one month's imports.