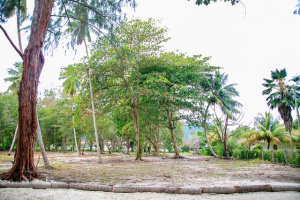 Given the size of the building, the hospital will be built at L'Union Estate. (Salifa Karapetyan, Seychelles News Agency)

(Seychelles News Agency) - The construction of a new state-of-the-art hospital on La Digue Island, Seychelles' third most populated island, started on Wednesday, seven months after the foundation stone was laid.

Seychelles' President Wavel Ramkalawan expressed his satisfaction that despite certain setbacks, the project has started and that he hopes work will progress swiftly, according to plan.

The construction of La Digue hospital is being funded through a donation of around $4 million from the UAE government and an additional SCR 2 million ($139,000) from the La Digue Hospital Fund.

The hospital, which will have a surface area of about 2,000 square metres, will be equipped with emergency rooms, operating rooms, a laboratory, motherhood and childhood care facilities and a pharmacy.

The facility will also offer X-ray, dental, ultrasound and haemodialysis services as well as an operating theatre for minor interventions.

At the laying of the foundation stone on August 15, last year, the UAE's chargé d'affaires, Ahmed Saeed Alneyadi, said that "the characteristics of La Digue attract tourists, honeymooners and even filmmakers from across the globe. We, therefore, strongly believe that it is imperative for La Digue to be equipped with a state-of-the-art hospital."

Currently, Logan Hospital is the sole source of medical care on the island, which has around 5,000 inhabitants. The Diguois residents have to go to either Praslin, the second most populated island or the main island of Mahe, for specialised treatments.

Meanwhile, La Digue is home to one of the most spectacular beaches in the world - Anse Source D'Argent - regularly ranked in the top 10 beaches of the world by CNN.com, National Geographic Traveler, and other reputable travel magazines.