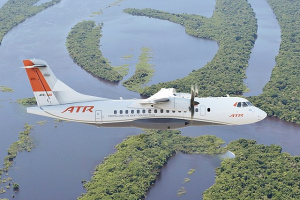 Savy revealed that IDC plans to purchase an ATR-42 plane which has the capacity to transport cargo to and from the islands. (ATR aircraft, Wikipedia) CC-BY SA 2.0

(Seychelles News Agency) - The Islands Development Company (IDC) plans to add a larger capacity aircraft to its aviation fleet to help with operations on Seychelles' outer islands, a top official said on Friday.

"We felt that with all the developments taking place at IDC we had to enlarge our airplane float and the kind of planes that we would be buying from now on," the company's chief executive, Glenny Savy, told reporters.

He revealed that the company plans to purchase an ATR-42 plane which has the capacity to transport cargo to and from the islands as it has two aviation containers.

"The new aircraft will not fit in the current hangars we own, it will therefore be necessary to build a new one," said Savy.

He said that to cater for a larger aircraft, the company has exchanged its three plots of land for one at the ex-Agro site at Pointe Larue, which is wider, on a leasehold agreement with the government.

The land used to house the Seychelles Agro Industries factory which produced milk, yogurt, fruit juices and tomato sauce among others.

IDC is financing the hangar estimated at $1.5 million to $2 million and an additional half a million for other works. Demolition work on the ex-Agro Industries site has already started.

The new aviation facility will include three buildings; a hangar, departure terminal and offices.

The CEO of IDC said that purchasing a new type of aircraft is also to keep its aviation fleet up to date since the Beechcraft planes the company is using are no longer being manufactured. The company added a Beechcraft 1900 to its fleet in April last year.

"Without aviation, it will be very difficult for us to develop our outer islands, as there are some islands that are very far from Mahe," he said.

IDC is a state-owned company that manages 13 outer islands and in the last few years has launched a series of projects on the outer islands that include a prawn farm on Coëtivy island and a hotel establishment Platte island.

Prawn farming is not new to Seychelles, an archipelago in the western Indian Ocean. In 1989, in collaboration with the Seychelles Marketing Board, IDC developed a black tiger prawn farm on Coetivy Island, with broodstocks imported from Madagascar and Mozambique. The farm, however, was deemed not profitable and ceased its operations in 2009.

The company has started construction work on a tourism establishment on Platte island. The construction of the Waldorf Astoria Platte Island resort -- at a cost of $100 million--  is expected to finish by the end of this year, with its opening planned in 2023.