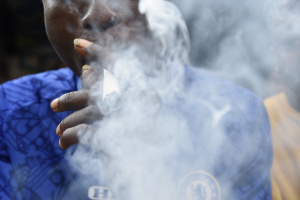 A man smokes cannabis popularly known as marijuana in Lagos, on November 11, 2019. Substance abuse in Africa's most populous country has been described as an "epidemic" by the United Nations but there is almost no proper treatment available for those trying to recover. (PIUS UTOMI EKPEI / AFP)

(AFP) - Nigeria's drug agency said Wednesday that it had destroyed 255 hectares (630 acres) of cannabis fields and arrested 13 people in the southwestern state of Ondo.

Cultivation and consumption of marijuana have escalated in Africa's most populous country in recent years, despite being illegal.

"Operatives of the National Drug Law Enforcement Agency, NDLEA, in a major operation that lasted seven days, have destroyed a total of 255 hectares of cannabis farms," agency spokesman Femi Babafemi said in a statement.

"In addition, 13 suspects were arrested and 250 kilogrammes (551 pounds) of cannabis seeds as well as 63.85 kilogrammes (of) cannabis weeds were recovered," he added.

NDLEA chief Brigadier-General Mohamed Buba Marwa urged officers to "look out for more of such farms in any part of the country."

He said it was a directive by President Muhammadu Buhari "that all such cultivation and plantations... must be located and destroyed."