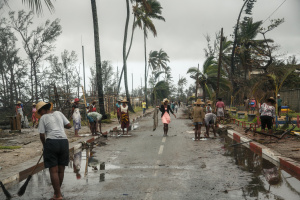 People employed by the FID (Fonds d'Intervention pour le Développement) clean up after the passage of cyclone Batsirai, in the Tanambao district on February 8, 2022 in Mananjary. The death toll from Tropical Cyclone Batsirai has risen to 92 in Madagascar, authorities said Wednesday, as humanitarian organisations ramped up aid efforts with more than 110,000 people in need of emergency assistance. (RIJASOLO / AFP)

(AFP) - The UN warned Tuesday that authorities and aid workers were racing against the clock to protect people as Madagascar braces for its fourth tropical storm in as many weeks.

Cyclone Emnati is expected to make landfall on southern Madagascar Tuesday evening -- just weeks after the island was lashed by Cyclone Batsirai on February 5, affecting some 270,000 people and claiming 120 lives.

At the same time, some 21,000 people still remain displaced from when tropical storm Ana struck in late January.

Another 5,000 were affected last week by tropical storm Dumako.

"We are in a race against time to protect those who dealt with the fury of the first three extreme events from the impact of Emnati," Jens Laerke, spokesman for the UN humanitarian agency OCHA, told reporters in Geneva.

The UN's World Food Programme (WFP) also said it was on an emergency footing.

"We are obviously praying for the best, but preparing for the worst," WFP spokesman Tomson Phiri told reporters.

The agency has been prepositioning food and non-food aid to roll out rapidly in the aftermath of the storm, Phiri said.

The UN's World Meteorological Organization (WMO) describes Emnati as "a large and dangerous cyclone likely to cause considerable damage."

Emnati had earlier been feared to strike with the strength of a category 3 or 4 cyclone.

But a WMO spokeswoman said it had been downgraded and was now expected to make landfall as a category 2 event.

Nonetheless, winds of up to 200 kilometres (120 miles) per hour were expected, she said.

Flooding and landslides from pounding rian are the biggest threats.

Laerke warned that the central and eastern regions that were badly hit by Batsirai would also likely be affected.

He said that around $26 million (22 million euros) were needed simply to help respond to the needs in the aftermath of Batsirai over the next three months.

Those requirements are"likely to rise further, based on the impact of the Emnati cyclone," he said.