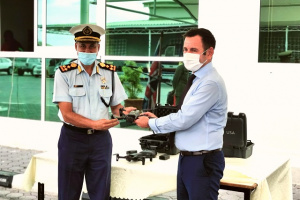 (Seychelles News Agency) - The Seychelles Defence Forces (SDF) is now better equipped to carry out real-time aerial surveillance of target vessels and search and rescue operations at any given time after receiving two specialist drones on Tuesday.

Donated by the UK government in collaboration with UNODC, the two Parrot Anafi drones will also enable video-recording before and after the Seychelles Coast Guard has boarded vessels and scouted inaccessible areas of the coastline.

Chosen specifically for their suitability for maritime operations, the two unmanned aerial vehicles are compact and lightweight, allowing for hand-launch at sea in under one minute which other drones of the Coast Guard cannot do.

During the handing over ceremony at the Seychelles Coast Guard base at Ile Perseverance, chief of defence forces, Brigadier Michael Rosette, said these drones can be a force multiplier for the coast guard as they patrol out in the middle of the ocean.

"In the Defence Forces, we have also recognised the potential of drones and their various applications that will act as a force multiplier for us, and assist in delivering the services we offer in the area of defence, law enforcement as well as in disaster and humanitarian assistance such as search and rescue incidents. They can keep the operators discreet and safer and also provide opportunities for missions that are impossible for manned aircrafts," said Rosette.

In June 2020, the SDF created a drone unit which brings together personnel from all departments - the special force, coast guard and air force.

The SDF found the need to introduce these technology because in the past when people got lost on trails or at sea, rescue missions were more tedious and time-consuming. Furthermore, it was difficult for rescue personnel to find the people in distress.

The two new drones have 32 times magnification camera which can record 4K HDR video, as well as possessing thermal imaging capability. This ensures clear images are captured by day and night, which is vital to capture visual evidence. The drones also have a longer range and endurance than the current drones that are used by the SDF.

On his side, the British High Commissioner, Patrick Lynch, said that "while the threat of piracy in the Western Indian Ocean may have receded, we have become increasingly aware of the challenges posed by Illegal, Unreported, and Unregulated fishing, trafficking in people and arms, and, perhaps most damaging for Seychelles, trafficking in illicit narcotics."

The Seychelles Coast Guard aims to have drone deployment personnel onboard their vessels when they do patrols in the waters of the island nation in the western Indian Ocean.