Madagascar cyclone toll rises to 92 amid calls for aid 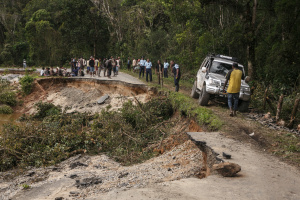 Residents look at the partially collapsed RN25 road in Ranomafana on February 7, 2022 following the passage of cyclone Batsirai. Cyclone Batsirai swept out of Madagascar on Monday after killing 20 people, displacing 55,000 and devastating the drought-hit island's agricultural heartland, leading the UN to warn of a worsening humanitarian crisis. (RIJASOLO / AFP)

(AFP) - The death toll from Tropical Cyclone Batsirai has risen to 92 in Madagascar, authorities said Wednesday, as humanitarian organisations ramped up aid efforts with more than 110,000 people in need of emergency assistance.

The National Office for Risk and Disaster Management (BNGRC) released data from the hardest-hit regions revealing that 71 of the dead were in Ikongo district, near the east coast of the Indian Ocean island nation.

BNGRC director general Paolo Emilio Raholinarivo said that Batsirai, which made landfall on the weekend, had left 112,000 people needing emergency assistance and forced 61,000 from their homes.

"It's devastation here," said Brunelle Razafintsiandrofa, a lawmaker from Ikongo who spoke to AFP by phone.

"Most of the victims died after their homes collapsed."

Many NGOs and UN agencies have begun to deploy resources and teams to help the victims of the cyclone which brought heavy rain and winds of 165 kilometres (102 miles) per hour.

France sent 60 emergency workers to help set up facilities for purifying drinking water, and to fly drones to assess damage in areas that are difficult to reach even at the best of times.

As the cyclone moved inland, it caused flooding that ravaged rice fields in the country's central "breadbasket", raising fears of a humanitarian crisis.

German experts have arrived in the country, one of the poorest on the planet, to "support the humanitarian response in the Batsirai passage areas", the BNGRC said.

Work is underway on the 20 roads and the 17 bridges that were cut and had isolated villages, it added.

"We know for sure that rice fields, that rice crops will be damaged, will be lost," said Pasqualina DiSirio, director of the World Food Program in the country.

"This is the main crop for Malagasy people and they will be seriously affected in food security in the next three to six months if we don't do something immediately."

The UN agency distributed hot meals in Manakara, one of the most affected areas.

The French Red Cross launched an aid appeal, and deployed 87 tonnes of humanitarian aid from its facilities in Madagascar and the nearby French island of Reunion.

Numerous aid organisations, including Action Against Hunger, Handicap International, Save the Children and Medecins du Monde, were mobilised ahead of the cyclone, organising equipment and medicines.

Alongside the aid provided by the government, they provided assistance to the victims: food, primary health care and the distribution of kitchen equipment, blankets, hygiene products.

Some 77 percent of Madagascar's 28 million people live below the poverty line, and the latest blow comes during a severe drought in the south which has plunged more than a million people into acute malnutrition, some facing famine.

Madagascar was still picking up the pieces after Tropical Storm Ana affected at least 131,000 people across the island late last month, with most of the 55 deaths occurring in the capital Antananarivo.