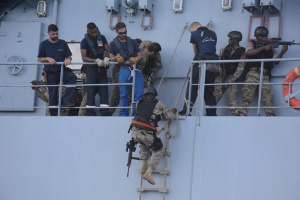 (Seychelles News Agency) - Around 40 Seychellois military personnel are participating in Exercise Cutlass Express, the largest U.S. military training operation organised by American naval forces in the Indian Ocean, according to a press statement from the U.S. embassy in Mauritius on Monday.

The U.S. Naval Forces Africa (NAVAF) exercise, held regularly in the region, will last for 11 days and includes in-port training as well as scenarios at sea and a symposium for senior leaders. Most of the training is aimed at simulating scenarios of detecting and apprehending suspect vessels engaged in illicit activity.

The exercise was opened on Monday by NAVAF's executive officer of the naval reserve component, Commander David Caffrey, and Lieutenant Colonel Jean Attala, the commander of the Seychelles Coast Guard.

In a press statement, Caffrey said, "The solution to transnational threats is multinational cooperation. And that is exactly what I see before me today, several nations and organisations gathered in a common cause. I am proud to be a part of this collaborative exercise. The effort and teamwork we will see on display the next two weeks is a testament to the professionalism and dedication of our forces."

SNA contacted the Seychelles Defence Forces (SDF) for more information on the Seychellois component but was informed that the SDF will give press interviews after the completion of the exercise.

Rapprochement with the United States

Seychelles, a group of 115 islands in the western Indian Ocean, has long been a strategic military location for world powers namely India, France, the U.K. and the U.S., as a safe port of call for their naval forces to refuel and rest, but also as a surveillance post for maritime and intelligence activities in the region.

The island state has long-standing military cooperation with these countries and relies on their assistance in surveillance of its vast Exclusive Economic Zone of 1.4 million square kilometres.

In July 2021, Seychelles – a member of the Non-Aligned Movement – turned a page in its diplomatic history by signing its first ever bilateral maritime agreement with the U.S. government, effectively allowing U.S. naval forces to work on Seychelles' military vessels and vice versa, in maritime operations.