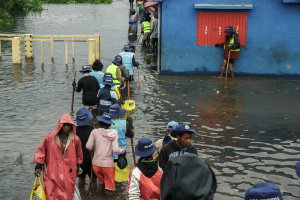 People walk through flood water after several houses were affected by rising water following heavy rains in 67 Hectares neighbourhood in Antananarivo on January 24, 2022. Antananarivo and several regions of Madagascar have been hit by strong tropical storms that have caused 34 deaths and more than 62,000 people affected, according to the authorities. (RIJASOLO / AFP)

(AFP) - Residents in an inundated neighbourhood of Madagascar's capital Antananarivo are returning with dread to see what remains of their homes and harvests, three days after Tropical Storm Ana relented.

Flooding has killed 51 people on the large Indian Ocean island off southeastern Africa since 10 days of intense rain began on January 17.

The storm formed to the east of Madagascar last week, causing floods and landslides and affecting around 130,000 people, with many made homeless overnight.

Ana then hit Mozambique and Malawi on the African mainland, killing 90 people across the three countries.

Rescue crews are still battling to access regions where roads and bridges have been swept away after the storm cut off tens of thousands and left them without power.

Travelling on makeshift boats, small groups row through water and a common floating plant called tsifakona normally given to pigs as food.

Some refused to spend the 300 Malagasy ariary ($0.08) for transport and are forced to carry their children where the water level remains high.

"I woke up at three o'clock in the morning to go to the toilet and found my house full of water," said Ulrich Tsontsozafy, 66.

Recalling the ordeal from the top of a pile of chairs in his waterlogged room, the retired soldier is trying to find ways to avoid having his feet constantly in the water.

"It ruins your skin. It chafes and it infects," he said of the floodwater, showing a fine white film that has developed on the skin between his toes.

Residents in Antananarivo's swampy Betsimitatatra plain are used to living with water thanks to an ingenious system of wooden pontoons that usually connect houses.

But the storm has engulfed everything with a brownish water that reeks of silt, while rats seeking food swam at the surface for a few days.

His wife, Juliette Etaty, 65, managed to save some bags of rice, heaped up with pans and clothes in a pile that reaches their ceiling.

Their grand-daughter Luciana, 17, remembered waking up in the middle of the night with her feet dipped in water.

"The first thing I thought of was my school notebooks," she said.

Gyms and schools in the capital have been requisitioned and turned into emergency shelters.

But the family preferred not to go for fear of catching Covid-19 in a crowded space and leaving their home vulnerable to burglars and the elements.

Toky Ny Nosy, an unemployed 42-year-old, took shelter in a school as she thought her home was about to collapse under the weight of the deluge.

She also suffers from asthma and said the water was preventing her from breathing properly.

Despite coming back to her neighbourhood every day for almost two weeks, the water still reaches her hips.

Hundreds of families huddled in a classroom converted into an emergency shelter watch the arrival of a truck laden with food for the evening.