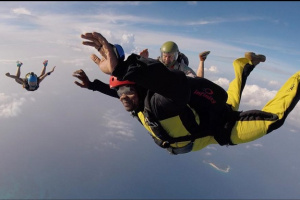 The programme was initiated by the co-owner of Fly Seychelles Skydiving, Francesco Drosi, who approached the Seychelles Defence Forces (SDF) with the idea.

"Every year during the military parade for the National Day, the country invites army officers from other countries to parachute in the stadium during the customary military parade. I want Seychelles to be able to have its own soldiers doing the jumps in the future, which is why I approached the SDF," said Drosi.

The training is being conducted by world champion skydivers, including Audun Wik of Norway's Skydive Tonsberg and Helder Sousa from Portugal. The theory courses started in December and to date, the soldiers have completed four sky jumps.

Drosi explained that it will take a lot of training for the soldiers to be ready to parachute into Stad Linite – Seychelles' national stadium. They will need to complete at least 300 jumps before they can earn the skydiving C license, which is needed for jumping and landing into tight spaces such as a stadium.

The other license that can be earned is the A license, which is for solo jumping, while the B license allows the jumper to parachute towards airfields, which is more open. The highest D license allows the holder to participate in large demonstration jumps and other exhibitions with difficult and tight landing areas. They can also be trained on flying into these places with flags and pyrotechnic devices.

Drosi told SNA that for the soldiers to complete 300 jumps it will take a while, but they are working hard to make it. If they do not reach that mark by the end of June this year, then they will have to postpone their National Day jump to 2023.

Since the instructors cannot stay in Seychelles, an archipelago in the western Indian Ocean, for a long period of time because of other commitments, the training has been split into three sessions. After the first part which is currently taking place, they will come back in March and at the end of May.

"It important to note that the soldiers are not only training for the military parade but also for other military operations, that may require parachuting to remote locations and areas that are inaccessible by land," said Drosi.

He said that among the soldiers, two of them are also training as paramedics so that they can attend to injured people during rescue operations.

Fly Seychelles Skydiving is based on Seychelles' second-largest island of Praslin and aside from training skydivers, they are also organising international competitions, such as last year's Innhop Experience.

This year's Innhop Experience event is scheduled to take place in April, while the Seychelles Boogie event will take place at the end of March.